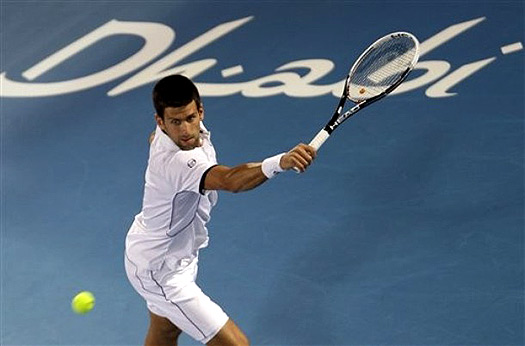 The world no.1 won 6-2, 6-1 in extraordinary performance at the Zayed Sports City tennis complex.

The match went on serve until the sixth game, when hurricane Nole stormed his way towards the final.

The Serbian star made four consecutive breaks of serve and won nine games in a row for 6-2, 5-0. Federer took one game before Novak served out the set and match to reach final on his debut in Abu Dhabi.

“That was definitely an incredible performance,” Nole said afterwards. “I will get a lot of confidence if I continue playing like that.”

Though it’s a warm-up exhibition for the top players, Novak fired a warning to his rivals ahead of the Australian Open with a convincing win.

He will face the winner of the all-Spanish clash between Rafael Nadal and David Ferrer in the final of the six-man invitational tournament on Saturday.