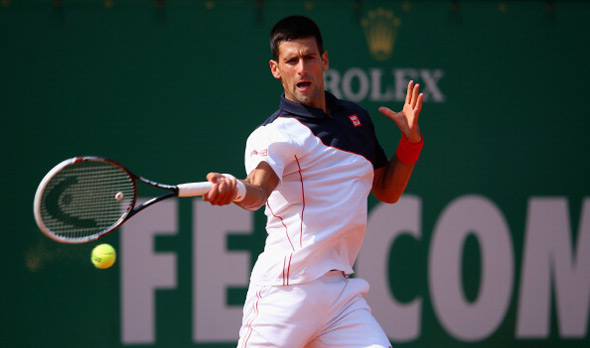 Second seed Novak Djokovic produced another great display on Court Central, recording a 6-0, 6-1 victory over world no.62 Pablo Carreno Busta in just 47 minutes to reach his sixth quarter-final at the Monte-Carlo Rolex Masters.

The Serb notched his 22nd win at the Monte-Carlo Country Club as he hit 24 winners to nine unforced errors and converted five of his seven break points. The world no.2 won 100% of his second serve points and didn’t face a single break point during the first ATP World Tour meeting between the two.

“I lost only two games in the first two matches. Can’t be better than this, for sure,” said Djokovic. “I don’t want to get carried away. I am confident on the court. I’m coming off a great American hard court season. I want to keep that going.”

Novak will look to make it 13 wins in a row when he takes on no.38-ranked Guillermo Garcia-Lopez in QFs. The Spaniard beat fifth-seeded Tomas Berdych 4-6, 6-3, 6-1.

Ahead of the quarter-final clash, Novak said: “Another clay court specialist, another match which I approach with an aggressive mindset in terms of game plan. I have already great variety in the game, which is one of the key components for an optimal success on this surface. You need to be able to play equally well defensively and offensively. That’s something I was doing quite well in the first two rounds.”