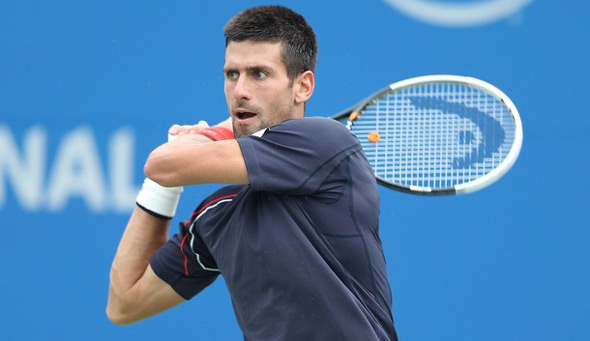 Nole is just one win away from defending his title at the Rogers Cup presented by National Bank!

World no.2 defeated no.5 seed Janko Tipsarevic 6-4, 6-1 in 1 hour and 45 minutes in a rain interrupted all-Serbian semi-final clash on Saturday evening.

Playing Tipsarevic for the seventh time, Novak won 89 per cent of points on his first serve and converted 3 of his 5 break point opportunities to advance to his fourth ATP World Tour Masters 1000 final in 2012.

Match was interrupted twice due to rain. Just as the players finished their warm ups and were ready to play, heavy rain started. The match was back underway two hours later.
At 3-2 (30-30) in the opening set for Nole, it started to rain again.

Players were back on court after an hour and a half delay. Novak had a break point, but Janko saved it with an ace. The Serbian no.1 fought off three break points in the seventh game to stay ahead, and capitalised on a set point in the tenth, breaking for 6-4. Fans enjoyed watching high quality tennis as both players contributed to some delightful rallies.

Nole made a double break in the second set for 5-1 lead. He saved four break points before closing the set and match 6-1.

“It really could have gone either way, especially in the first set with the several interruptions because of rain; it was very important for both of us to start off well after those delays,” said Djokovic.  “You could feel that there was a lot of tension going on and we both were trying to find the rhythm on the court.”

The Frenchman booked his place in the finals with a 7-6, 6-3 victory over American John Isner.

It will be the eighth career meeting between Djokovic and Gasquet, Nole leads 6-1.

“Richard has been playing well this week… He is motivated and wants to win. I expect a tough match.”

Two-time Rogers Cup titlist  (2007, 2011) is bidding to lift his third trophy of the season, having won the Australian Open and Miami.