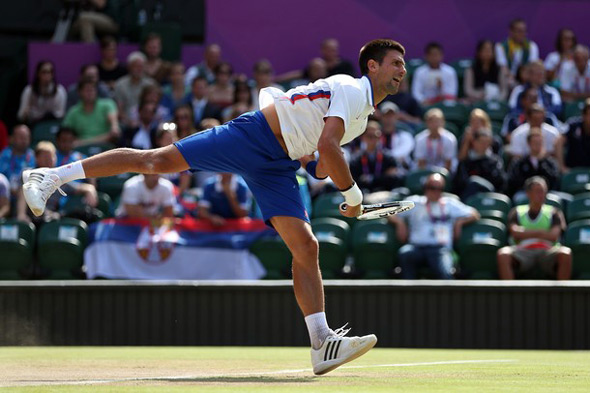 Second-seeded Serbian hope will contest the London Olympics bronze medal match on Sunday after he lost to the British third seed 5-7, 5-7 in 2 hours on Centre Court, at the All England Club, Wimbledon.

Both Novak and Andy got off to strong starts and played high quality tennis. There were no breaks until the 12th game when Murray capitalised on his first set point for 7-5.

Nole had break point opportunities in the first, third, ninth and 11th games of the second set, but Andy saved all of them and broke again in the 12th game to end Great Britain’s 100-year wait for an Olympic men’s singles tennis medal.

“I had a lot of break balls in the second set,” Novak said. “Practically every service game, I had chance in the second set to make a break, especially the one at 5-all. It’s a disappointing loss. But he deserves to be in the final. He played better in the important moments. He served extremely well and used that element in his game efficiently when he needed to. The crowd gave him a support and positive energy. He managed to use that in his favour and win the match.”

Djokovic will look to repeat the result from Beijing 2008 when he won a bronze medal for Serbia beating American James Blake.

The world no.2 will play eighth-seeded Juan Martin del Potro of Argentina.

Looking ahead to Sunday’s bronze medal match Novak said: “I will try to  compose myself, try to gather all the positive energy, as much as I can. The motivation is always there. I will try to repeat the success that I had four years ago.”