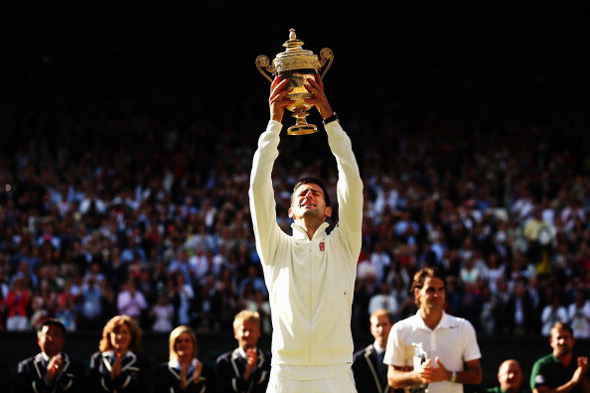 Nole is the 2014 Wimbledon champion!

The victory which brought him the second Championships trophy and seventh Grand Slam title also means he will reclaim the no.1 spot in the ATP Rankings!

It was an exhilarating battle between two of the game’s great competitors on the grandest tennis stage and the final that many fans had hoped for.

The opening set went into a tie-breaker. Federer moved to a 3-0 lead. Novak maintained his composure to win five of the next six points. He had two set points, but Roger withstood both and went on to win a 52-minute set 9-7.

Djokovic earned two break points in the first game of the second set. He could not convert them, but capitalised on his chance in the third game and held to go 3-1 up. The 2011 winner kept the advantage to level at one-set-all.

Nole took the third set by winning a tie-breaker 7-4.

The 27-year-old Belgrade native was leading 5-2 in the fourth set. He was serving for the match at 5-3, but the 17-time major champion bounced back. The Swiss fended off a break/match point in the tenth game, broke again and served it out 7-5 to force a decider.

Novak managed to regroup and recover from the loss of the fourth set. He made a crucial break in the 10th game and clinched a dramatic win after three hours and 56 minutes.

He then headed into the stands to celebrate with his brother and his team, including three-time Wimbledon champion Boris Becker, brought in by the Serb at the start of the year to help end his 18-month GS drought.

“I want to congratulate Roger. It was a great match to be a part of, he is a magnificent champion, a great example of a great athlete and a role model,“ Novak said during the presentation ceremony. “After losing the fourth set it wasn’t easy to go on and win the fifth set, I don’t know how I did it. This is the best tournament in the world and the one I always wanted to win, so to be able to compete at such a high level I am so grateful.” Then, speaking to Roger, Djokovic added: “I respect your career and everything you’ve done, thank you for letting me win today.”

Novak dedicated the win to his soon-to-be wife Jelena Ristic and their future baby, thanked his team and paid tribute to his first coach Jelena Gencic who passed away last year.

Novak and Roger have crossed paths on 35 occasions on the professional circuit, with the H2H now standing at 17-18. It was their 12th Grand Slam meeting (they are now tied 6-6).

With seven Grand Slam titles to his name, Djokovic moves alongside the likes of John McEnroe and Mats Wilander – 10 behind Roger Federer at the top of the all-time list.

This is Nole’s 45th singles title overall and fourth trophy in 2014. He won ATP Masters 1000 events in Indian Wells, Miami and Rome.