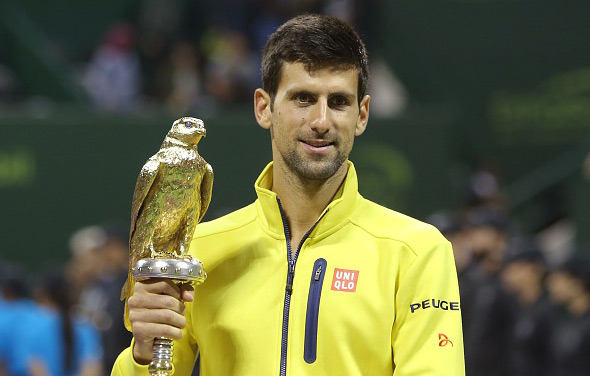 Nole started 2016 at the top of his game to win Doha title!

Top seed Novak Djokovic extended his recent dominance over Rafael Nadal by ousting the second-seeded Spaniard 6-1, 6-2 on Saturday to win the Qatar ExxonMobil Open crown for the first time.

Nole captured his season-opening title and his 60th tour-level trophy overall in one hour and 13 minutes. The world no.1 became the 10th player in the Open Era to reach the 60-titles milestone. He draws level with Andre Agassi in a tie for ninth.

Djokovic also took the lead in the ATP Head2Head with Rafa for the first time in their storied 47-match rivalry (24-23). This was his most convincing victory against Nadal.

Novak was in cruise control from the start. He saved a break point in the opening game of the match and raced to a one-set lead, breaking the Manacor native in the second and sixth games.

The 27-year-old Serbian star continued to apply pressure on Nadal. He converted his chances in the first and fifth games of the second set and served out the match on second attempt.

“I played very much perfect tennis,“ Novak said. “From the beginning, I hit every shot the way I imagined I would hit it. Those two sets give me a great feeling. It gives me a lot of confidence and satisfaction, particularly against Rafa.”

Doha was Novak’s only warm-up tournament before this month’s Australian Open.

The 10-time Grand Slam winner is heading to Melbourne where he will defend his title at the first major event of the season (January 18-31).