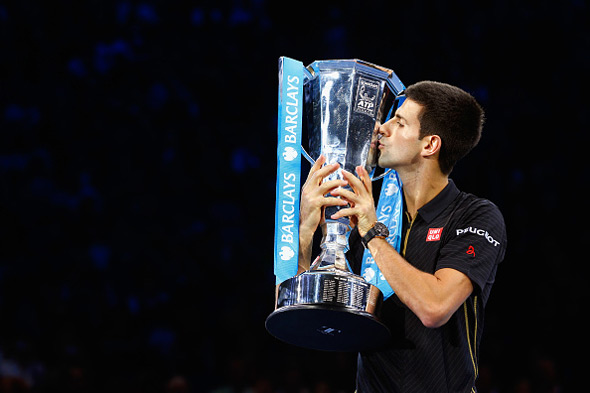 World no.1 Novak Djokovic claimed his third consecutive Barclays ATP World Tour Finals title as Federer withdrew ahead of final due to a back injury.

“It’s very hard to talk about this and celebrate right now. But this trophy reflects all my achievements this year,” said Novak. “Clearly this is not the way I wanted it. I’m sure that if Roger could’ve come out and play, he would’ve. I wish him all the best for his recovery, he has an important week ahead of him with the Davis Cup final.”

The announcement came just 30 minutes before the final was set to begin and Federer addressed the crowd himself, apologizing and explaining he was unfit to compete against Novak. This is the first walkover in a final in the tournament’s 45-year history.

“Unfortunately, I’m not fit to play the match tonight,” said Federer on court. “Clearly I wish it wasn’t so. I tried all year to be ready for the Barclays ATP World Tour Finals, and I didn’t want it to end this way. I tried everything I could last night, also today – painkillers, treatment, rest, so forth, warm-up, until the very end – but I just can’t compete at this level with Novak. It would be too risky at my age to do this right now and I hope you understand. Congrats of course to Novak, who’s played an amazing season, and an amazing tournament here as well.“

En-route to the final in London, Nole beat Cilic, Wawrinka, Berdych and Nishikori.