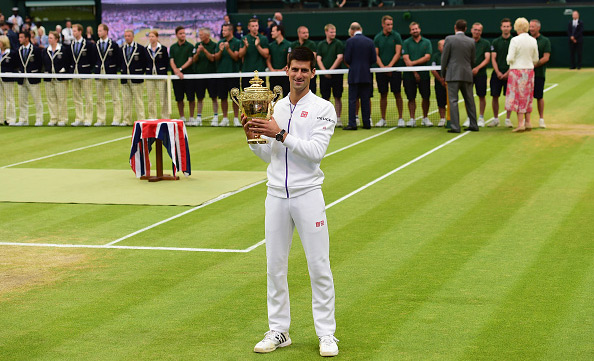 Novak capitalised on four of his 10 break points, while the Swiss converted one of his seven chances. The match-up was the 40th between the pair, they are now tied 20-20.

Federer broke first for 4-2, but Djokovic broke back immediately and held to level. The Swiss kept pressing and earned two set points with Nole serving at 5-6, only for the Serb to save both with big serves. Novak forced a tie-breaker and took the first three points of the shootout, raising his game to race through it for 7-1.

The real excitement came towards the end of the second set, when both players produced their best tennis. The top seed failed to convert seven set points, as Federer fought to level the match at one set apiece, sealing dramatic tie-break 12-10.

Nole recovered superbly from the disappointment of missing the chances, hitting back to win the third and fourth sets. One championship point was all he needed to clinch the victory after two hours and 55 minutes of play.

“It’s a great privilege to play against Roger, who is a great champion,” Novak said on-court. “He has done so much for our sport on and off the court. I was aware coming onto the court, that Roger would play his best when it matters the most. He pushes you to limits. You work hard all your life, every day. You envisage yourself being on the Centre Court, holding this trophy. It’s a very thrilling feeling.”

Roger Federer praised Nole’s impressive win, “Novak not only played great today, but also this year, last year and the year before that! Well done, Novak, you deserved it. At the end he was rock solid. Once more, it has been a privilege to play here.”

Novak is the first man to retain The Championships title since Roger Federer did so in 2007. Djokovic had previously lifted the trophy in 2011 (d. Nadal) and 2014 (d. Federer).

The 28-year-old Serbian star became just the seventh man in history to win 200 Grand Slam matches. He clinched the 54th title of his career, sixth in 2015. Nole’s third triumph at the All England Club equals the mark of his coach, Boris Becker, the 1985-86 and 1989 winner.

After a couple of weeks off and a well-deserved rest, Novak will begin preparations for the US Open Series (Rogers Cup in Montreal, Western & Southern Open in Cincinnati and the last Grand Slam in 2015 – the US Open).