Novak, Zverev to play for title in Rome! 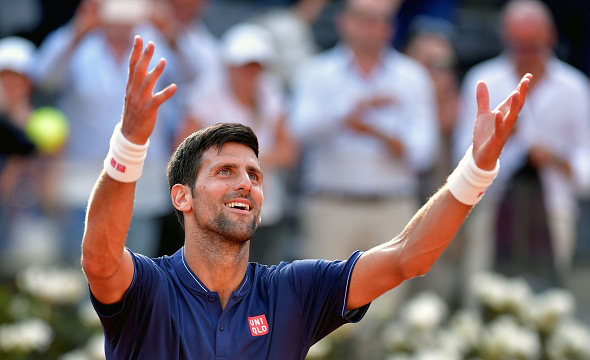 Novak is through to his eighth Rome Masters final!

The 29-year-old Serbian ace remained undefeated 5-0 against the next-generation star Dominic Thiem in their ATP H2H series, as he hammered the young Austrian 6-1, 6-0 in just 59 minutes on Saturday evening.

With the win, Novak improved to 8-0 in last-four matches in the Italian capital.

The second seed produced a brilliant performance to advance to his first ATP World Tour Masters 1000 final in 2017. He raced to a one-set lead against the 23-year-old Thiem in 26 minutes, breaking him twice, in the second and fourth games.

Djokovic continued to pressure his rival in the second set. The world no.2 used the momentum to break the Mutua Madrid Open runner-up three more times and claimed an emphatic victory, his 20th match win of the season.

“This is undoubtedly my best performance of this year and maybe even longer. I’m overjoyed and happy with every minute that I spent on the court today. It was a perfect match. Everything that I intended to do, I have done it and even more,” said Djokovic. “There’s not much to say except that I am so grateful to experience something like this, because I have been waiting and working for it for a long time.”

Novak will face no.16 seed Alexander Zverev in the Internazionali BNL d’Italia final on Sunday at 16:00 CET. It will be their first career encounter.

Djokovic will look to win his 31st Masters 1000 title, while the German is competing in his first Masters final.