Novak’s Australian Open defence gets off to flying start 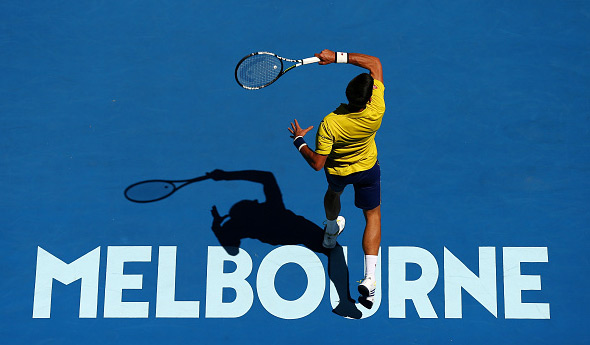 Novak needed one hour and 55 minutes to record his 51st victory at Melbourne Park.

“A nice opening match with real Australian summer conditions. There were some long rallies, long exchanges that got both of us a little bit short on air,” Novak said. “But I think physically I was really good on the court. I managed to play the best tennis when I needed to. I think serve is something that I take out from today’s match as the best part of my game. Got me a lot of free points, a lot of winners and aces from that shot. In days like this, you need to serve well.”

“Having to play somebody for the first time, especially somebody that is as young as him, he’s only 19, it can be tricky. He moves very well. He can play equally well from defence to offence. And he’s one of the players that people are talking about as a potential top player in the future. He’s got that potential, no question about it. He needs experience, he needs more time.”

The 28-year-old Serbian star lifted his first trophy in Melbourne 2008, completed a three-peat from 2011-13 and won it again last year.

Djokovic goes on to face 187th-ranked Quentin Halys for a place in the third round.

The Frenchman upset world no.78 Ivan Dodig of Croatia in four sets. It will be the first career meeting between the two.