Novak reaches third round in Miami 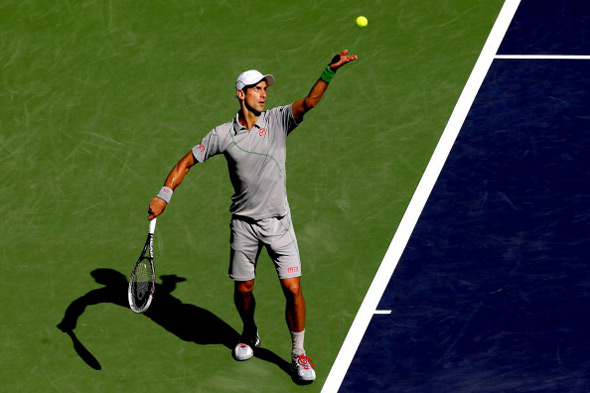 Three-time former champion Novak Djokovic made a solid start to his Sony Open Tennis campaign with a 6-4, 6-3 victory over Jeremy Chardy (48) on Friday at the ATP World Tour Masters 1000 tennis tournament in Miami.

The 26-year-old Belgrade native landed 70% of his first service points and converted all three break point opportunities he earned to secure his eighth win (8-0 record) over the Frenchman in one hour and 24 minutes.

Novak broke Chardy in the fourth game of the opening set and consolidated it for 4-1 lead. The world no.2 got broken when serving for the set at 5-3, but broke once again for 6-4.

Games went with serve until the eighth game of the second set. Djokovic made a break and served out the set and match 6-3, improving to a 13-2 match record on the season.

“It takes a little bit of time to get used to conditions in Miami and center court. The first matches are always tricky, especially when you have an opponent who goes for his shots as Jeremy did today,” Novak said. “But it’s a straight set win, I came up with some good serves and good shots, that’s what matters the most to me.”

Novak goes on to face no.30 seed Florian Mayer in the third round on Sunday (5-0). The German beat Ivan Dodig of Croatia earlier in the day.