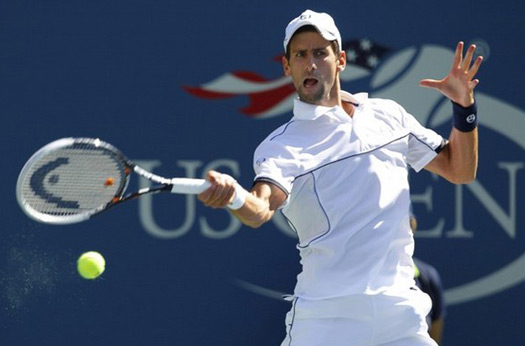 Nole is through to the second round of the US Open after only 44 minutes spent on Arthur Ashe Stadium where he last played on in 2010’s final when he fell in four sets to Rafael Nadal and lifted his second USO runner-up trophy.

On Tuesday afternoon, the Serbian star stepped back on the court.

Nole raced through the opening set with a triple break for 6-0 in just 21 minutes.

The 24-year-old continued to dominate in the second set. Niland took one game, but that was all he could do. Nole was 5-1 up when the Irish world no.197 retired due to illness.

The world no.1, who has nine titles to his name in 2011, is looking to win his third Grand Slam title of what has been a remarkable season. The Belgrade native has lost just two matches in eight months. His record now is 58-2.

Seems that Novak is fully fit after he had a week to recover from the shoulder injury that forced him to retire against Andy Murray in the Cincinnati final a week ago.

“After Cincinnati I took some time off, and I did everything in order to recover the shoulder,” he said. “Today I didn’t feel any pain. I served well and I played well, so I have no concern.”

“I think I’ve played well for these 45, 50 minutes that we had on the court. It’s unfortunate for my opponent, obviously. He had food poisoning he told me after the match. But I felt great on the court, and that’s something that’s really important for the start of the tournament.”

Nole will next take on world no.74 Carlos Berlocq. The Argentine beat Spaniard Pere Riba in straight sets 7-5, 6-0, 6-1.

Djokovic and Berlocq have never met before.