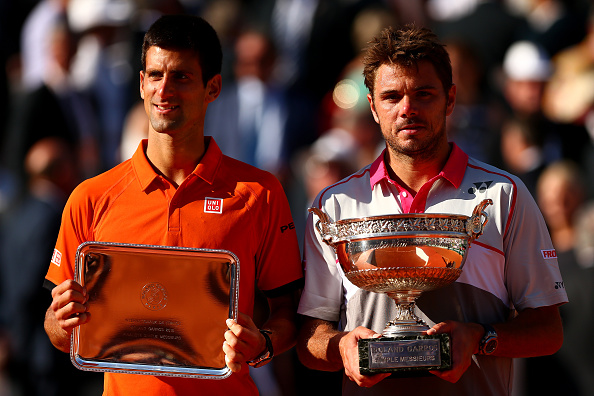 The 28-year-old Serb was aiming to win his first French Open title and become the eighth man in history to complete the career Grand Slam.

Novak broke in the seventh game and held for 5-3. After saving a break point with an ace, Djokovic clinched the first set in 43 minutes.

Wawrinka evened match at one set apiece breaking the Belgrade native in the 10th game.

The Swiss kept the momentum going. He capitalised on his break point chance in the sixth game of the third set and sealed it three games later.

Djokovic broke early in the fourth set and consolidated for 3-0 lead, but Wawrinka won 12 of the next 15 points, breaking back to level at 3-all. The Serb earned three break points in the eighth game but failed to convert. He got broken in the very next game and Stan served out the match, saving a break point before finishing with a backhand winner down the line.

Wawrinka, who captured his second Grand Slam trophy, was warmly congratulated by Nole. The fearless Swiss became the sixth former RG boys’ champion to win the men’s title. There was a special and prolonged ovation for Nole, who was moved by the reception he received on Court Philippe Chatrier. A round of applause continued for at least a couple of minutes as he received the runners-up plate from three-time winner Gustavo Kuerten.

“Congratulations to Stan. It is not easy to stand here as a runner-up again, but I lost to a better player who played some courageous tennis and deserved to win,” said Novak. “I want to thank my team, my wife and the French public. I will be back next year to try again to win the title.”

It is the third time that Djokovic has finished runner-up in Paris, having fallen to Rafael Nadal in the 2012 and 2014 finals.

After a couple of days off, Novak will start preparing for the third Major event of the season, the Wimbledon (June 29-July 12), where he won his second Championships trophy last year beating seven-time former champion Roger Federer in the final 6-7, 6-4, 7-6, 5-7, 6-4.