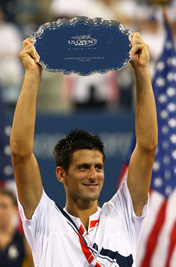 Season of Novak’s great success started by winning a title in Adelaide.

Novak played quarter-finals at the Australian Open, semi-finals in Rotterdam, finals at the US Open and Indian Wells, which brought him to top 10. It was in Miami where he finally broke the reign of the two rivals, Roger Federer and Rafael Nadal. When he beat Nadal, Murray and Canas, and became the youngest player who conquered Key Biscayne, the entire tennis world realized that the new champion had come to the stage.

A few weeks later, he won the Estoril tournament. He played semi-finals of Roland Garros and Wimbledon, and started the American tour by winning his second masters title in Montreal, beating the top three players en-route to the title: Roger Federer, Rafael Nadal and Andy Roddick. This trophy led him to number 3 in the world, which he held for 91 consecutive weeks – a truly remarkable tennis record.

At the US Open he made his first Grand Slam final, where he lost to Roger Federer.

Later that season, Novak secured Serbia’s historic place in the World group of Davis Cup competition, after which he won his 5th title in 2007, in Vienna.