Djokovic Hosts Special Guests at the 2009 US Open! 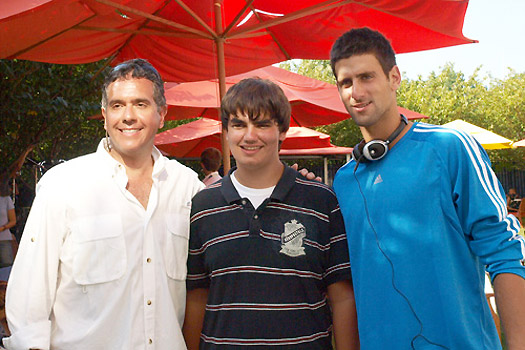 Before Saturday, Patrick Palombo had never been to a tennis match in his young life.

The 14-year-old Brooklyn, NY, native had his first tennis experience at the US Open, like many kids who grow up in the New York area, but that is where the similarities to other first tennis matches likely end.

Palombo, along with his Big Brother Al Artesona from the Big Brothers, Big Sisters Program in partnership with the New York Fire Department, came to the day session of Day Six of the 2009 US Open as guests of world No. 4 Novak Djokovic of Serbia.

The two sat in Djokovic’s box during his thrilling four-set victory over American Jesse Witten in Louis Armstrong Stadium – not the typical place most kids sit to watch tennis.

But there was a reason for their special invitation.

The eighth anniversary of the tragedy of September 11, 2001, falls during the US Open this year, a day no one will ever forget, especially the Palombo family. Frank Palombo, a fireman from Ladder 105, Engine 219 based in Brooklyn, was one of the firefighters who were killed responding to the attacks on the World Trade Center.

He left behind a large family of a wife and 10 kids, including Patrick.

And now during the 2009 US Open, Djokovic is graciously hosting one kid each day he is playing the rest of the tournament from the same program as Palombo – who got to be the lucky first.

The whole day was arranged just a few days prior in collaboration between the fire department and CAA Sports, which represents Djokovic.

Artesona is a retired firefighter who has been Palombo’s Big Brother since 2002. It is a special program between the Big Brothers, Big Sisters of New York and the fire department to mentor kids who lost parents on 9/11. Artesona and Palombo were matched up and love it. They do everything from going to paintball to the movies to dinner together every few weeks.

It was Artesona who received the call from the counseling unit at the fire department asking if they would be interested in coming to the US Open. They were not sure what it would be like but once they arrived, they could not have asked for anything more than the great match and the great meeting.

“I didn’t know what to expect but I loved it. It was one of the best sports events I have ever been to. I have never been to any tennis tournaments and I loved it,” Palombo said. “I thought Djokovic did really good and Witten also really good also.”

“We came in and we had more than a great time,” Artesona added about the day.

And Djokovic is honored to be able to host the kids. He met Palombo and Artesona after the match and brought along a present – an Adidas grey and orange performance shirt for Palombo.

“I was very privileged to be the player who can give him an opportunity to enjoy the tennis and bring a smile to his face,” Djokovic said. “Of course you don’t want to come back to what happened that day and I have been going through something very similar, I had two wars in my 22 years and I know what it feels like. Today is quite exciting for him and I gave him a little present and of course in the future whenever he wants to come back, he is more than welcome.”

The two had a few minutes to chat and Palombo let Djokovic know just how much he enjoyed the match – and he made him a little nervous when the match went to four sets.

“He said I scared him a little bit because he was cheering me on and it was a very close match but it was a good one,” Djokovic said. “I am really fortunate that I was the first player that he saw (play in person).”

Palombo, who now lives in Ridgewood, NJ, also has two brothers currently in the Big Brother program. His brothers, John and Daniel, tried to hide their envy of not being the ones going by joking around with Palombo beforehand that he might not have a good time. As soon as he arrived at the USTA Billie Jean King National Tennis Center though, he did not believe them.

“When they heard about it, they tried to make it seem like I shouldn’t be excited,” Palombo said of his brothers. “They said, ‘It won’t be that fun.’ Then when I got here, I saw they were completely wrong.”

It was also not the first sports meeting for the Palombo children in wake of the Sept. 11 tragedy as the family also met the New York Giants back when Jim Fassel was the head coach and were honorary captains at a game.

But on Saturday, Patrick loved meeting Djokovic and the shirt he received– and saw firsthand that the great player is also a great person.

“I like the shirt, it is awesome. He asked whether I liked the match or not, then he gave me the shirt and he said, ‘This is a gift from me to you, I hope you like it’,” Palombo said of their meeting. “He was as nice as I thought he would be.”