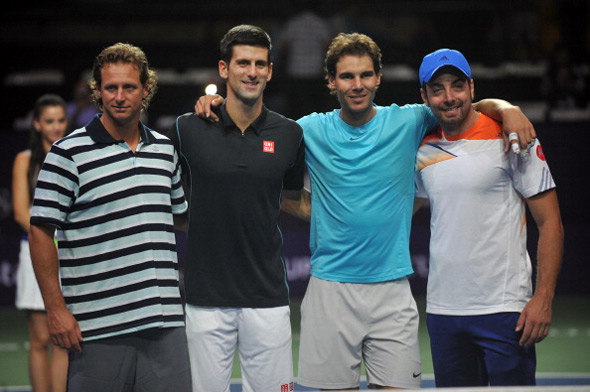 Past and present tennis stars took part in a farewell game for Chilean player Nicolas Massu in Santiago, Chile, on Wednesday evening.

World no.2 Novak Djokovic and no.1 Rafael Nadal, along with retired Argentine David Nalbandian, faced off in Massu`s honour.

“I can`t believe it. On my farewell night Nadal and Djokovic are here to help me say goodbye and someone who was world no.3 like Nalbandian. I don`t know to react,” the double Olympic champion Massu said. “It will be my last match and thousands of memories will pass through my head — the trips, the matches, the Davis Cup, everything that tennis gave me, thanks to God.”

At the inaugural game at the Movistar Arena, Massu beat Nalbandian while Novak took on Nadal in the star match, just nine days after he beat Rafa at the ATP World Tour finals. 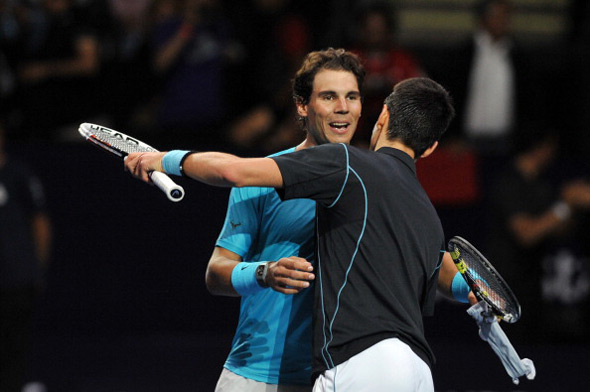 Massu announced in August that he would retire after 16 years as a professional tennis player, during which time he won two gold medals at the 2004 Olympic Games in Athens, secured 32 Davis Cup wins and was ranked no.9 in the world.

He currently serves as captains of Chile`s Davis Cup team, along with the former world no.1 Marcelo Rios.

On Tuesday, Nole, Rafa, Massu and Nalbandian held a joint press conference and conducted a tennis clinic with children and wheelchair players from the Teleton Foundation.

Novak will head to Buenos Aires to mark the retirement of David Nalbandian.

The 26-year-old Belgrade native will play Nadal once again on Sunday, November 24, at La Rural. It will be Nole’s first appearance in Argentina.

David’s farewell party will also include a doubles match. He will pair with Rafa against Nole and Juan Monaco.