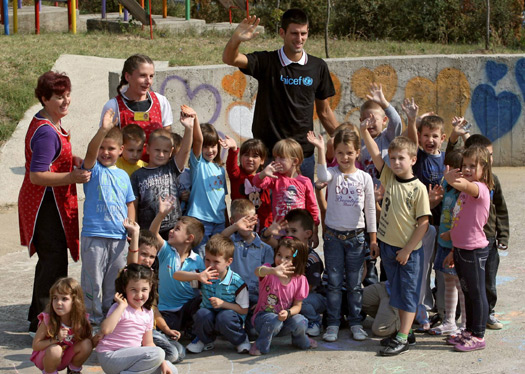 World no.1 and UNICEF National Ambassador to Serbia is marking the holiday season by lending his voice and financial support for disadvantaged children in Serbia and around the world.

“I hope my donation and support will help make a difference in the lives of young children throughout Serbia, especially those who have fewer opportunities to reach their full potential,” said Novak, who has made a $100,000 donation today to support early childhood education in Serbia.

“Building a solid foundation in the early years of a child’s life will not only help him or her reach their full potential but will also result in better societies as a whole.”

Since becoming a UNICEF National Ambassador for Serbia in August, the 24-year-old Belgrade native has provided strong support to the children’s agency – speaking out for some of the most vulnerable children in Serbia. In September, he visited a kindergarten in Smederevo, near Belgrade, attended by the most marginalised groups in Serbia, including children with disabilities and those living in Roma settlements. Nole is also promoting UNICEF Serbia’s card and gift campaign to help raise funds for some of the most vulnerable children around the world.

“UNICEF appreciates Novak’s commitment to children’s rights, and welcomes his engagement on early development for the most vulnerable children, which is so critical in Serbia” said Judita Reichenberg, UNICEF Area Representative.

Novak is including the most vulnerable children in his future.

“I want to help children in Serbia and around the world so they can realise their dreams,” he said. “All children have rights and those rights must be protected.”