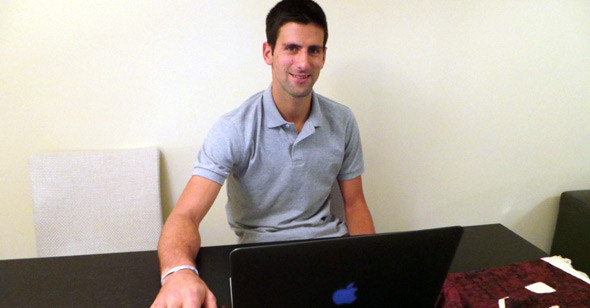 The eleventh round of Nole4You Q&A was streamed LIVE for the second time on Thursday evening via Nole’s official Ustream channel www.ustream.tv/djokovicofficial, despite some minor technical problems.

This little gathering with fans started at 20.30 CET, live from Monte Carlo, where the world no.1 is preparing for the new season which he will begin with an exhibition tennis event in Abu Dhabi. Novak chatted with fans and answered the top 10 Nole4You questions.

He talked about his favourite places in the world (Kopaonik, Belgrade and Monte Carlo), about his participation in the 2013 Davis Cup competition, and congratulated Czech Republic teams on their remarkable success in Davis Cup and Fed Cup.

Nole also joked about December 21: ”I wish everybody to survive ‘the end of the world’ tomorrow, which I don’t believe is gonna happen.”

The 25-year-old Serbian star thanked his fans via Facebook and Twitter for their patience and for sending so many interesting questions.

“Nothing can stop us my friends! I wouldn’t miss our live gathering for a world! It was great tonight, you were amazing, and thank you so much for your understanding :) Until next time… Thank you all!”

For everyone who couldn’t make it to the event, here is the full video.

You will find out what his favourite book is, the skier he admires, what languages he will learn next…