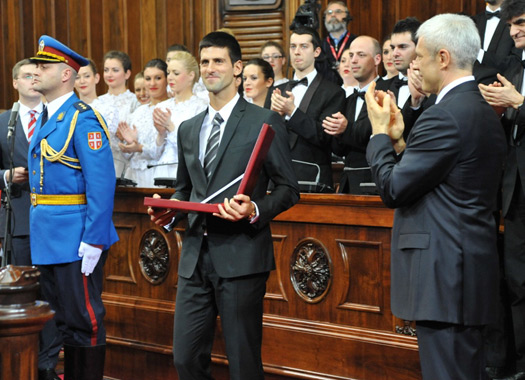 Novak has been awarded Serbia’s top state honour, the Order of the Karadjordje’s Star of the 1st degree, at a ceremony in the National Assembly, marking Serbia’s statehood day.

Nole said he was proud to receive the highest state medal in the building in front of which he celebrated his Wimbledon title and rise to the world no.1 spot together with his countrymen.

“I may have dreamed of lifting the trophy at Wimbledon, but I could never have thought that my country would reward me with such great honour. I am indebted to my people, and I will do my best to continue representing our beautiful country in the best possible way,” Novak said.

Serbian president Boris Tadic awarded 17 individuals and institutions. Novak has been awarded the medal for exceptional merits in representing Serbia, as the best ‘ambassador’ of Serbia in the world.