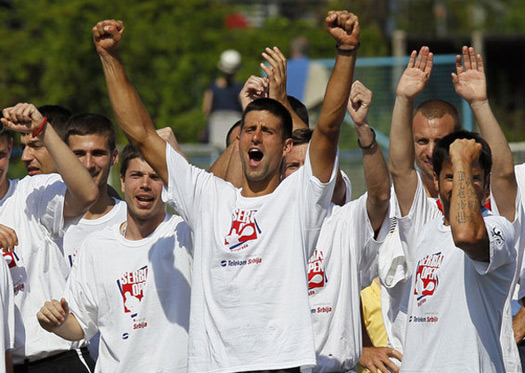 The final score was 1-1. CNN reporter Pedro Pinto scored for the tennis players’ team in the first half, and the former Red Star striker Nenad Jestrovic equalised the result.

The match was attended by 500 spectators. All the proceeds will go for the National Association of Parents of Children with Cancer (NURDOR). The Union of Tennis Professionals has organised a tennis program for Kids called “Tennis 10s”, a part of the ITF’s ‘Tennis Play and Stay’ campaign.

“Thanks to everyone who’s come to this match. All the people who have been here today have shown they have a big heart. There are many individuals and organisations in our country that need help, and it’s never enough,” said the best Serbian tennis player and no.1 seed at Serbia Open Novak Djokovic.

You can see the photo gallery here.