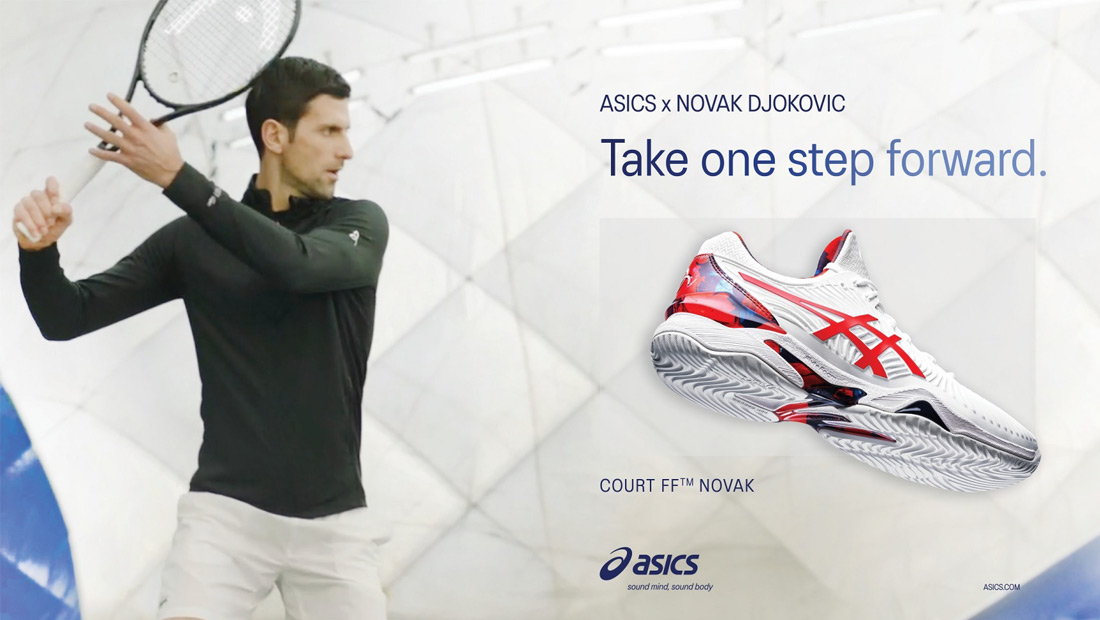 ASICS’ founder Kihachiro Onitsuka believed that sport has the power to uplift spirits, project positivity and propel people forward. ASICS still believes this, and the special film is created with the aspiration to showcase that with one of the best embodiments of this spirit – Novak Djokovic – by highlighting the mental aspect alongside on-court performance.

Novak Djokovic has reached the top and won many grueling on-court battles by facing them head on and pushing body and mind forward for every point. His journey and approach to the game has inspired players all over the world to do the same.

“During my career I have had many moments where I had to make the choice and take the step forward to lift myself up before and during matches. I’ve always prioritized keeping a balance between physical and mental wellbeing – and that has helped me reach my goals. It is with this experience and knowledge that I want to encourage children and young players to take a step forward towards reaching your goals and lifting yourself up – on and off the court”, said Novak Djokovic, ASICS’ Global Footwear Ambassador.

Chisaki Mihara, Global Marketing Lead for ASICS, explains “we want to remind children and young players that there is more to the game than winning, losing and breaking records – which is to never lose the will to step forward and take it to the next level. We want them feel that, as a sports brand, ASICS will be always rooting for those who take that one step – by producing innovative products and services.”

In the film, a special edition of the COURT FF™ Novak is revealed for the first time – a shoe Novak Djokovic will wear this summer.

The design of the shoe was done in collaboration with Novak Djokovic to convey his philosophy into the design and colour scheme of the shoe: that sport has the power to inspire. The blended colour application and blooming flowers on the shoe is a representation of his philosophy.

“Djokovic was looking for something special and creative for the momentous 2021 calendar, and was very passionate about being involved in the design”, said ASICS Footwear Design Team Chihiro Sugimori. “The flower graphic was not created digitally but in acrylic paint. We painted again and again until it became the exact flower envisaged in his and everyone’s mind.”

ASICS is also proud to announce a multi-year partnership extension with Novak Djokovic as its Global Footwear Ambassador.

The extended partnership will help ASICS further expand its global tennis footwear business through Novak Djokovic’ continued insights and feedback on the production of tennis footwear as a world class player.

“My footwear is a crucial part of my technical equipment”, said Novak Djokovic. “Extending my partnership with ASICS ensures that I will be able to keep on playing in the best possible technical footwear and at the same time help product research, development and innovation. I look forward to playing in the COURT FF™ Novak over the coming years.”

“Djokovic has already established himself as one of the best tennis players of all time. Over the coming years he will be able to build on his achievements and do so wearing ASICS footwear – it is a great honour and opportunity for the brand to be associated with Djokovic as a player and a globally recognizable ambassador of the sport”, said Yasuhito Hirota, President and COO of ASICS Corporation.

The shoe will be on sale this Summer.