Bleacherreport: Has the Djoker in the Pack Come of Age? 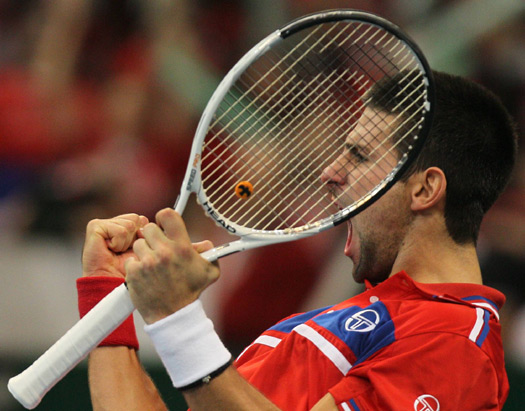 Maybe he misjudged his preparations for the year’s first Grand Slam. Maybe, during the spring months, he took the wrong advice on his serve from Todd Martin. And maybe, in the closing months, he wished he had encountered Roger Federer in fewer matches.

But, when all is said and done, maybe he will look back on 2010 as the year when he wove together the multicolored strands of his uninhibited talent into a single, strong vein of form. And perhaps it will define the moment when the Djoker “put away childish things” and matured into one of the most complete players in tennis.

It is easy to forget how young Djokovic was when he began to impress on the tour. He turned pro at 16 and, two years later, ended 2005 as the youngest player in the top 100.

By 2006, he had won two ATP titles from three finals and was the youngest player to end the year in the top 20.

Two more mountains were scaled in 2008 with a first Slam title in Melbourne and the Masters title in Shanghai. Now ranked third in the world, Djokovic won four titles from seven finals, reached the semis of Roland Garros and Wimbledon while taking the bronze medal at the Olympics.

One more key moment in that year – a blood-red strand in his ever strengthening rope of maturity – was a win in the Davis Cup playoffs that ensured Serbia’s place in the World Group in 2009.

It was no surprise, then, that in 2009 the lean, fast, rangy Djokovic physique, driven by a keen intelligence and a passion that threatened to burst through his ribcage after every win, powered through 10 finals to five more titles.

He played more matches than anyone else (97) and won more of them than anyone else (78). He reached the quarterfinals or better in 19 out of 22 tournaments. On his favorite hard courts, he won 29 out of 33 matches after Montreal in August, concluding with back-to-back titles in Basel and the Paris Masters.

Even on clay, Djokovic took the scalp of Federer in Rome and very nearly Nadal’s, too, in Madrid.

So he rode into 2010 on a wave of success, with a new coach – American Todd Martin – and some of his natural, but often misplaced, ebullience reined in. His reward was to break through the Federer-Nadal duopoly.

With the Spaniard needing treatment on troublesome knees, the Djoker proved just how serious his intentions were, and rose to No. 2 in the world. A little further into the year, with Nadal back at top of the rankings, Djokovic stepped above Federer not once but twice between summer and autumn. And yet, measured by his earlier progress, 2010 was more of a steady canter than a gallop to the line.

Consistency was his watchword: for one thing, he made the quarterfinals or better in all four Grand Slams. But while he won an early title in Dubai, he waited until October and Beijing for his second and final ATP trophy of the year. In Miami he suffered his first opening round loss since January 2009, and in his home tournament in Belgrade, he retired ill in the second match. He conceded a two-set lead to Jurgen Melzer in the quarters of Roland Garros and went out of Queens in the third round.

Nevertheless, Djokovic was taking the first of several important steps towards infusing his game with the brilliant hues of his former palette. He separated from coach Martin, citing communication problems between the American and Djokovic’s long-standing coach, Marian Vajda. More revealingly, he commented on the impact of the partnership on his serve. “He tried to change [my serve], but it was all too complicated in the end and now I’m back to the old one.”

It had certainly appeared that the Djokovic serve was not up to its usual standard, and the less reliable it became, the more the confidence seemed to leach from the rest of his game.

The statistics from around this time make for fascinating reading. Between his first match in Indian Wells and his last in Rome, his first serve percentage was in the 50s four times and topped 70 only once, and his double fault rate in a couple of matches soared.

By Toronto, it did not fall below 68 in all four matches. By the U.S. Open, most matches ranged from the high 60s to the mid 70s. And between Flushing Meadows and the World Tour Finals, he averaged just one-and-a-half double faults in each of his 29 matches.

The second important confidence boost came at the U.S Open itself, in a semi-final meeting with a Federer aiming to reach his seventh final in New York. Djokovic carried the baggage of losses to Federer on Arthur Ashe in each of the previous three years and, when he went down 7-5 to an attacking Swiss in the opening set, it had the makings of a similar tale.

But Djokovic attacked back, all guns blazing, with a 6-1 retort. The next two sets seesawed in the same way, and when Federer gained two match points in the fifth, the result looked inevitable. However, the saving of those points showed the very best of the Serb as he fired off two blazing winners, one a huge smash to the backhand corner, the second a searing forehand down the line.

The way he won the match was even more impressive, outlasting Federer in a 21-stroke rally, staying calm, striking every ball in the heart of the racket, angling almost every drive to the back corners. He eventually forced Federer to drive a forehand wide of the sideline.

The Serbian expression moved from shell-shocked to matter-of-fact to celebratory. He had broken a jinx, proved a point, and swelled with confidence by an inch or two.

Even though Federer beat him in their three remaining matches of the year, the Djoker knew he had made a serious breakthrough. The clue to how he achieved it – one more step in the maturing of the Serb – came in his own words after the New York win: “I just knew I had to be patient and not lose my emotions too much, because that was the case in the past where I was losing the momentum…[Federer] uses that nervousness of the opponent. He feels it.”

This time, Djokovic did not look nervous and showed infinite patience. He was also pragmatic in recognising that Federer had found his best tennis of the year to beat him in the semis of the WTFs. What’s more, Djokovic had more important business before 2010 was out.

The flame-red fire of patriotic fervour, ignited already in helping his country into the Davis Cup World Group, had brought out the best of Djokovic three times in 2010 already.

He had beaten Sam Querrey and John Isner to lead Serbia to the quarterfinals. Then after Wimbledon, he beat Ivan Ljubicic and Marin Cilic to book a semi-final face-off against the Czech Republic. So within days of the U.S. Open final, he was in Belgrade fighting from a set down to beat world No. 7, Tomas Berdych – the last step to a finals showdown against France, once again in his home city.

Serbia’s red, confronted by the blue of France, produced a purple streak from Djokovic. He was entirely dominant in his first match with Gilles Simon – not too much of a surprise, of course, against a man working his way back from injury. But against the outrageous athleticism and flamboyant tennis of Gael Monfils, many expected an altogether different affair.

Both men stretch and reach like India-rubber figurines, with limbs longer than they should be and movement faster than a raging torrent. Both are showmen to their fingertips and both were in form. Monfils, indeed, had reached the final of the Paris Masters only the month before.

But the Djokovic aiming to keep Serbia in the competition was a new animal: serious, focused, efficient and contained. He wasted not one iota of emotional energy. He neither dropped his head nor glanced to the heavens – those familiar gestures of the pent-up Serb. Here was a man of purpose, with the confidence to back up that purpose.

Where Monfils’ balance was thrown backwards to take the ball on the fall, Djokovic held his baseline and took the ball on the rise. He was quickly up 4-1 with a merciless attack of wide forehands to within inches of the baseline corners and piercing backhands both down the line and angled across the forecourt. Add in delicate drop shots and a few lobs, and the Frenchman’s goose was cooked.

The Djokovic serve, too, was at its very best. Hitting 82 percent of his first serves in the opening set, he did not lose a point on serve until the seventh game and produced hardly an error in closing the first set at 6-2.

The second set was almost a repeat, with Monfils forced into over-hitting by the accuracy and penetration of the Djokovic play. The first break came with relative ease at 3-2, and a second break swept Djokovic to another set at 6-2.

The third set saw Monfils go on the offensive. For a brief phase, the crowd was treated to both players doing what they do best: drop shots, bullet-fast drives to the baseline, wide drives to the sidelines, a constantly moving ballet across the width and depth of the court.

The composure of the Serb was disturbed only once, when Monfils achieved a rare break. Djokovic vented his frustration by smashing his racket to pieces, but that release seemed to help him regain his focus, and he reasserted his dominance once more.

As Monfils served to save the match, Djokovic even took control of a crowd that the umpire had lost many games before. With a raise of his hand, silence fell, and so did Monfils.

In the end, it took a little over two hours to illustrate the kind of player that Djokovic has become, his new patience, his consistency, his intelligent control and his abandonment of despair. And, incidentally, he served not a single double fault.

The full-blown celebration had to wait out a marvellous performance by his compatriot, Viktor Troicki, but then the extrovert, uninhibited Djokovic was unleashed.

That Djokovic is the same man who strode into the O2 arena sporting an eye-patch after a contact lens incident the night before. He’s the man who happily modelled the briefest of briefs on the catwalk in Toronto. He’s the man who enthusiastically shaved his head, on court, with his Serbian teammates.

But he’s also a man who can say of an opponent “every ball kind of listens to him”, who can speak Serbian, Italian, German, French and English, who has established a new ATP tournament in Belgrade to spread the tennis word to young Serbians.

Now, he is also a player who, via a handful of key moments in his 23rd year, has learned to weave his many strengths – the arrow-straight backhand drive, the feathered drop, the cross-court air-born forehand, the accurate all-court placement – into the tightest and strongest of tennis.

He claims that, “Right now, emotionally, I’m confident, I’m happy, and looking forward to upcoming challenges.” It’s that maturity and contentedness, allied to a rainbow-rich array of shot-making, that will surely deliver his second Grand Slam in 2011.