Deuce: Djokovic Plots His Rise To No. 1! 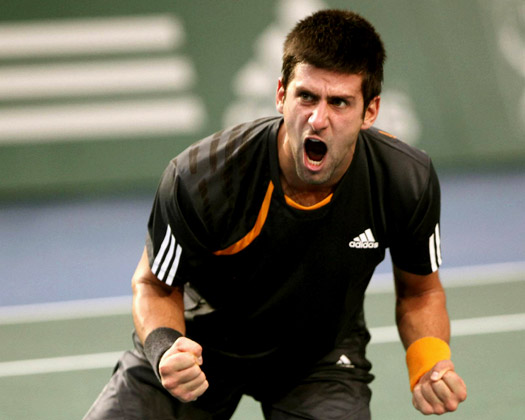 21. 11. 2009. · Novak Djokovic might not have added another Grand Slam championship to his 2008 Australian Open title as he had hoped in 2009, but former and current members of the Serbian’s coaching team believe he has taken a step closer to becoming the next player to rank No. 1 in the South African Airways ATP Rankings.

The older players from Belgrade remember Novak Djokovic back then as a ‘little-old person’, so serious was he about his tennis. He was known to arrive early at the Partizan Tennis Club so he could observe the senior players training and his kit was always prepared for competition; racquets, change of shirt, towel, bottle of water, banana and a tube of balls were all neatly organised and packed inside his bag.

”One day we were still training when he [Djokovic] began to jog around the court and started some agility exercises,” recalls fellow Serbian Dusan Vemic. “And I said, ‘Hello’, and asked him a couple of questions. He paused a few seconds, and then looked up at me straight in the eyes and answered quite seriously that he needed to improve his footwork if he is going to get much better. I just stared at this little kid who was barely bigger than his racquet bag and thought, ‘Incredible!’ He was only six years old!”

Djokovic would soon begin to go from good to great and each year he rose steadily up the South African Airways ATP Rankings. That was until this year.

”This is first time in his tennis career where he has not seen improvement through the rankings,” continues Vemic. “I mean he has had a very good year, but I expect that this will bother him because he wants to be the best very badly.”

This year Djokovic has been happy to sit back while Roger Federer, Rafael Nadal, Andy Murray and Juan Martin del Potro have taken the greater share of the plaudits, but somewhere between January and November he has quietly managed to win an ATP World Tour-best 76 matches. Still for all that, the tennis world has had more questions than answers. Had Djokovic become too comfortable? Had he peaked? Even the player himself admitted, in September, that he “expected something greater” this year. It was not until back-to-back ATP World Tour titles at the Davidoff Swiss Indoors in Basel and at the BNP Paribas Masters in Paris that his grand plan began to bear fruit.

The Kopaonic Mountains of Serbia could have come out of a storybook fairytale with their thick forests filled with maple, pine and Balkan beech trees that cast long, dark shadows over ancient monasteries and big stone fortresses. It was here among the thick grasslands and river gorges, that the seed of greatness was planted in Novak Djokovic.

Jelena Gencic runs a children’s tennis camp here each summer. It was Gencic who discovered a five-year old Monica Seles. Fourteen years and hundreds of kids had passed before her eyes before she spotted greatness again.

”When little Novak came to me I needed only one week with him to be sure,” says Gencic. “On the fifth day I asked him in front of his parents, ‘Novak do you want to spend the next seven, eight years training very hard every day, sometimes with smiles and sometimes with tears?’ He said, ‘Yes, I want to be great.’ He was only six years old but he had the eyes, and the heart and the soul of a champion. I was so sure that he would make it.

”He was always a very emotional child,” Gencic continues. “Every day during our tennis camp I would walk with the kids in the forest after tennis. And I saw that Novak was picking these wildflowers and putting them together. One day I asked him, ‘Novak for whom are you picking these beautiful flowers?’ And he answered to me, ‘For my mother.'”

They would spend the next six years together, and Gencic would teach Djokovic about music, literature, poetry and life. Then, the inevitable happened.

”He became too good,” admits Gencic. “He needed stronger sparring and better players. So, I called my friend Nikola Pilic in Germany and asked him to please help this special boy.”

With more than half a century in tennis Pilic had pretty much seen it all when Novak Djokovic entered his life.

On one occasion, Pilic was running late. Inside his tennis academy in Munich he noticed Dijana Djokovic sitting nearby and stopped to join her for an espresso. Suddenly, Novak stormed past mother and coach without saying a word.

”I was surprised and called out to him and asked him why he was so angry,” Pilic says. “Novak answered that I was late for practice and he didn’t want to waste his time. He was not yet 13 years old, but even then at that young age he knew exactly what he wanted in life. I had no doubt that he would be a great player. Novak is an extremely smart person and besides his talent he has a very high tennis I.Q.”

The intelligence factor is something that keeps popping up when Djokovic is discussed. Backing up Pilic’s claim is two-time Grand Slam finalist Todd Martin, “I think that he [Djokovic] is a very smart person. In talking with him you can tell that he understands whatever topic is being discussed, whether it is tennis, world events or culture.” If all of that praise is not enough then consider that his signature shoe is advertised as, “The Genius Novak”.

What people outside the Djokovic camp may not have realised when they began to write him off this year was that Novak had been forming a plan in his assault on the summit of professional tennis. In order to improve his fitness and flexibility he hired Gebhard Phil-Gritsch, former strength and conditioning coach of Thomas Muster. Djokovic and Phil-Gritsch went straight to work. Soon Novak’s body began to take shape; chest and biceps were carved firm while the shoulders broadened and abs sprung tight.

Still, Novak was not satisfied with his performance and while long-time coach Marian Vadja would continue by his side, Novak felt that he needed extra insight with tactical coaching and asked Martin to join his team.

”I was thinking about working with somebody that can help me out with my serve and my volley game,” Djokovic says.

”The circumstances were that he has been in a relationship with Marin [Vajda] for several years and was interested in having some additional feedback,” says Martin, who will continue with ‘Team Djokovic’ in 2010.

Determined to attack the net with greater success, Novak worked persistently on the transition from the baseline.

”Compartmentally, his skills are very good,” continues Martin. “His volleys are technically sound, but there is a lot of feel that is garnered in recognising opportunities to move forward.”

It is that very feel that Martin mentions, a certain spontaneity, that one would think comes natural to Djokovic. Or does it? Federer has often been portrayed as an artist and Nadal as a raging bull, but how would you describe Djokovic? For all the stand-up comedy and improv, lies a keen observer and very methodical young man with a scientific mind for tennis. Study Djokovic’s shot selection and you will notice that it is consistently high percentage. And when he whips a backhand passing shot cross-court and dips it inside the service line you get the feeling that he has measured out an acute angle with all the precision of a mathematician.

Still all the best laid plans in the world and brilliant thinking mean nothing if you cannot execute under pressure. Especially so, if you are trying to defeat Federer, the World No. 1. For Djokovic the moment of truth has arrived, and he is at the crossroads that just so happens runs right through Switzerland. 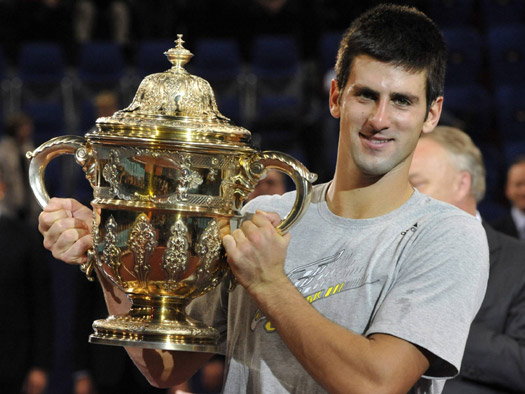 The frustration inside the Stade Jakobhalle in Basel, venue of the Davidoff Swiss Indoors, is growing with every errant Federer forehand. The partisan crowd seems to waiver between agitation and impatience. Up until this game Djokovic has lost only two points on his serve, but while he is trying to close out the first set against an out of form Federer, ATP World Tour umpire Lars Graff is required to announce “deuce” for the 11th time this game. Djokovic shakes his head slowly side-to-side and exhales a few times. Clenching the grip of his racquet like an axe-handle he steps up to the baseline and delivers a jack knife slice serve out wide for an ace. Yet another set point for the Serbian. Djokovic would approach the Federer forehand once again, this time successfully, and that burden of greatness so long ago strapped to his back in the Kopaonic Mountains just got a little lighter.

”To reach that goal [World No. 1], I’m going to have to be very successful at the major tournaments,” Djokovic states. “Throughout the whole of 2009, I’ve been playing quite consistent, and especially on the lower category tournaments where I was winning a lot and playing a lot of finals in [ATP World Tour] Masters 1000 events. But I haven’t done a great job at the Grand Slams, which wasn’t the case in the last two years. So I just hope I’ll make that better in 2010, because that’s what makes difference, obviously, between the top players rankings wise.”

Martin confirms, “I think that deep down inside he [Djokovic] realises that he has talent to do more than he has done, although he has done an awful lot.”

“He [Djokovic] is definitely not satisfied to be number three or four,” states Pilic. “He wants to be number one. His dream was always to be the best.”

For many it is no longer a question of if, but when will Djokovic become World No. 1. Somewhere in Serbia, or maybe Munich, there will be an old coach who says, “I told you so.”