30. 11. 2011. · GQ, the leading men’s general-interest magazine, announced the 2011 Men of the Year: the annual list of the men (and woman) who entertained, excited, and inspired us most this year. The biggest names in music, film, theater and sports are recognised in the December issue.

Nole was named “Ace of the Year”.

Enjoy the GQ’s interview with the world no.1 and an exclusive video from his photo shoot that was posted on GQ.com. 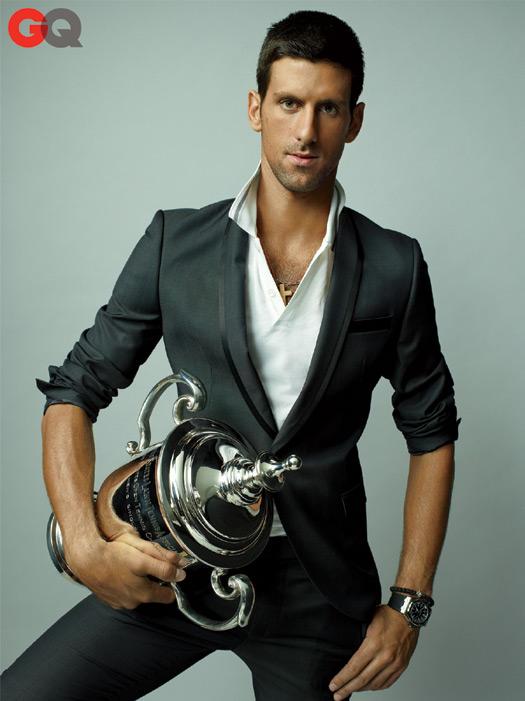 On the unlikely rise of tennis’s new hero

Tennis was not expecting this, a year ago. Tennis did not see the need. Tennis already had written the script, and it was a perfectly satisfactory one, if you liked tennis. There, in the near court, was Roger Federer, the most wonderful and successful player anyone had ever seen, slowly beginning his natural decline as he entered his 30s. Across the net was Rafael Nadal, possibly-debatably! – superior even to Federer. Certainly younger, in his mid-20s; sleek and powerful like a Grecian statue, or a tawny replica of a Grecian statue made of expensive Iberian ham.

They would play each other, Roger and Rafa, age trying to fend off youth with grace and guts. Their rivalry would be beautiful and moving; fans would choose sides, pull for Federer to bravely turn back the clock, tell themselves they were seeing the greatest tennis in history.

Novak Djokovic? Somebody had to lose to Federer or Nadal in the semis. So bring on the rawboned Serb: a nifty returner, a locker-room cutup, a guy one ineffable degree shy of championship material. He’d won the 2008 Australian Open, OK, and he’d beaten Federer in a wild match at the U.S. Open in 2010, but he seemed to have bobbed up to his natural level. Nadal was 16-7 against him, and 5-0 in tournament finals; Federer was 13-6. To wrap up their 2010 season, both of them beat him at the Barclays ATP World Tour Finals. He was 23 and ranked No. 3, and after helping pull off a Serbian victory in the Davis Cup final, he was able to close out the year on a two-match winning streak.

Then the calendar turned over, and so did the sport. Djokovic beat Nadal on grass, on clay, and on hard court, in California, Miami, Madrid, Rome, London, and New York. He beat Federer in Australia, Dubai, California-three consecutive tournaments-lost an epic match to him at the French Open, then beat him again in Flushing. Roger and Rafa seemed as excellent as ever. But Djokovic had crossed over into the world of the ’85 Bears, Pedro Martinez, Usain Bolt. It didn’t matter how good anyone else was.

What changed? Djokovic is in Monte Carlo, and someone has handed him a cell phone with a dying battery to answer questions about the inexplicable. “I’ve matured as a player”, he says. “I’ve matured as a person. I know what to do. I know how to handle my life, my career.” His training is the same as ever, he says. He has the same coaches he’s had for years. He switched to a gluten-free diet, which he believes helps with his breathing and allergies, and which has introduced him to a worldwide community of people eager to recommend specialized restaurants, but he doesn’t give credit to food magic.

“I just wasn’t consistent enough, and I just wasn’t actually believing enough that I could get it together and start winning more major events and be No. 1”, he says.

Maturity, he says. During Wimbledon, as he closed in on the No. 1 ranking, he spent his time off the court trying to get a squirrel to eat out of his hand and tweeting about his progress. “The squirrel was one of my close friends in London”, he says. “Unfortunately, I didn’t see her after I won the title, because I wanted to celebrate it with her.” 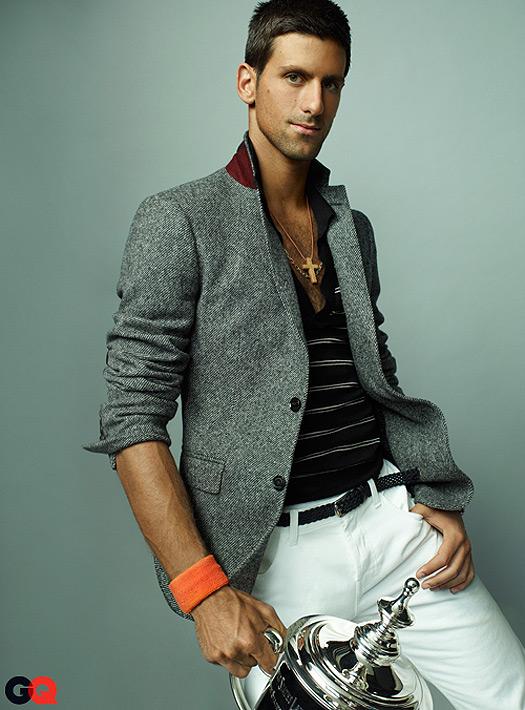 You can also find video online of Djokovic’s long, wry face jutting out from under a silky blonde wig, as he vamps his way through a fake commercial in the guise of Maria Sharapova.

The impressions, he says, were something he did as a young boy, after the famed tennis coach Jelena Gencic picked him out for training, the way she’d picked out Monica Seles. (This is not necessarily the biography of a regular-guy champion.) “As a kid I was creative”, he says, “and I was dreaming of having one stroke out of each player who was on top of the tennis at that time, you know. Let’s say Agassi’s return, Sampras’ serve and attitude on the court, and, I don’t know, Rafter’s or Edberg’s volleys and forehand, and these are the strokes that I kind of imagined to have, and I impersonated those players, and that’s how it started.”

It’s a goof, and it’s not a goof. “I always try to have something that keeps my mind relaxed, keeps my mind a little bit off tennis”, he says. The most electrifying thing about watching Djokovic, the quality that pulls in a casual viewer, is that even while playing at the highest level ever attained in his sport, some piece of his mind seems still to be functioning on the normal human plane. He has not turned his back on lesser life-forms, in the manner of a Michael Jordan, and vanished into a rat tunnel of competitive rage. He places another shot improbably-yet certainly-inside the line. He turns away and pumps his fist, not in abandon but with a sort of narrow-eyed, thoughtful glee. It’s as if he’s as awed as we are by what he can get away with.