A magical evening in Rio feat. Nole and Guga! 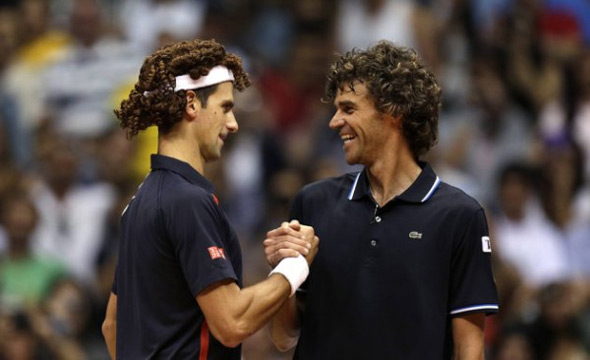 Clay court specialist Guga won 7-6 (9), 7-5 in a match that was not just about tennis, but also fun, laugh and joy, dancing…

Kuerten made a break in the seventh game and was serving for the set at 5-4, but Nole broke back to level at 5-all. Guga sealed a tie-breaker 11-9.

The retired Brazilian star won the second set and match 7-5, breaking in the 12th game.

“Guga is one of the most charismatic and loved players of this game and tonight he showed why,” Nole said in an on-court interview. “I hope you understand how much this means to me. I’ll come back to Brazil for sure. Obrigado, obrigado a todos!”

More than 10,000 people enjoyed the exho full of humour and emotions.

Players entertained fans by dancing and Novak put on a big wig to imitate Guga’s hairstyle.

At the end of the match, the greatest tennis player in the history of Brazil repeated the gesture made after winning the third championship at Roland Garros and drew a heart in the center of the court.

“Another unforgettable moment in my life… thank you for your endless love,” he said.

Nole will play a football friendly before a Brazilian league match on Sunday (14.50 local time / 17.50 CET), when he will join his countryman Dejan Petkovic, who starred for several Brazilian clubs in the last decade.