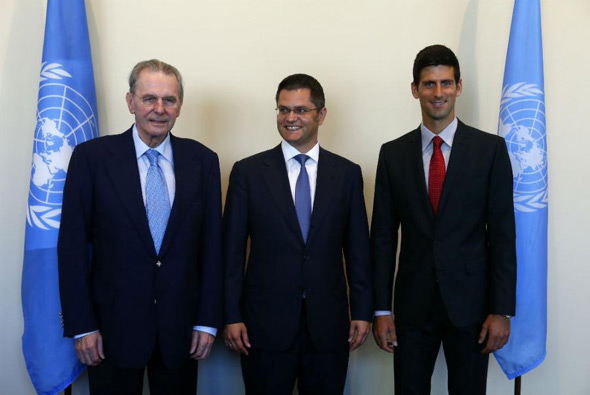 World number one tennis player, Novak Djokovic, addressed the the UN General Assembly on Friday, August 23, where an International Day of Sport for Development and Peace was declared for April 6.

Novak thanked the UN for adopting the resolution, saying that sport is the best way to keep children away from the streets, drugs and crime.

“Sport can help direct general attention to the most at risk and vulnerable in our community, especially disadvantaged children. When we encourage kids to dream big and work hard, we can make a tangible difference in their lives,” said Djokovic. “Competition is not only to win the trophies and medals, it’s a form of personal empowerment, internal search of excellence and a healthy way of disciplining the body and mind.”

The six-time Grand Slam champion from Serbia said he was born in a small but proud country which has been through some difficult times, and sport served to encourage young people and boost their self-esteem.

“The International Day of Sport will promote fair play, team work and respect for one’s opponent. Every successful society is built on these foundations,“ said Novak.

The UN General Assembly President Vuk Jeremic said sport serves to promote peace in the world, which is also an Olympic ideal.

He hailed the decision a “historic” step in recognizing the power of sport to erase cultural barriers and mobilize people around the world.

“Sport can be a powerful handmaiden for peace and reconciliation. It can bring us closer,” said Vuk Jeremic, adding that sport programs have been used to deliver HIV/AIDS prevention messages, help curb obesity rates, promote children’s and maternal health, and further gender equality.