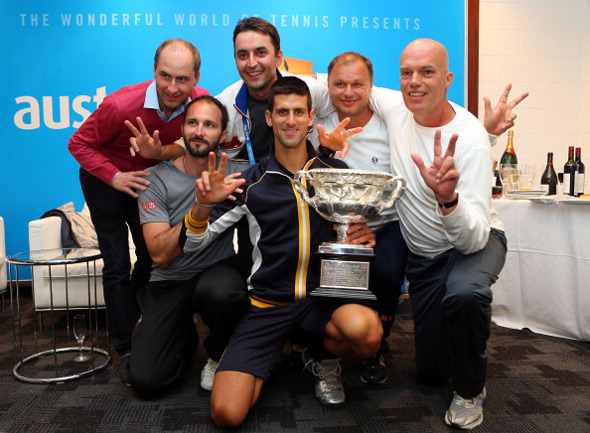 World no.1 Novak Djokovic and his latest success in Melbourne have inspired media reactions from all over the world. “King of the Antipodes”, “Historic hat-trick”, “Djokovic the destroyer”, “Indestructible Djokovic” are some of the respectable newspapers and internet portals’ titles, a day after the historic Australian Open three-peat.

ESPN Sport
In a final that had the makings of a classic when two of the best returners in tennis were unable to get a break of serve in the first two sets that lasted 2:13, the difference may have hinged on something as light as a feather. No one gave an inch for more than two hours before Novak Djokovic took advantage of Andy Murray’s vulnerability and snagged another Australian Open title, Bonnie D. Ford writes. It’s hard to be too comfortable in what has become Djokovic’s house.
The Wizard of Oz – There’s something about the magic of Melbourne for Novak Djokovic. With a four-set win over Andy Murray he became the first player in the Open era to three-peat at the Australian Open.

Herald Sun – Novak Djokovic creates history with third straight Australian Open crown
INDESTRUCTIBLE Novak Djokovic has stormed into Australian Open history.
Underlining his status as both the world’s premier player and the sport’s flintiest scrapper, Djokovic was simply too tough. In a remarkable serving performance, the world champion was not broken by Murray in 20 service games.

NY Times – Djokovic Wears Murray Down for Australian Open Title
No tennis champion has covered the angles and the corners quite like the elastic-limbed Djokovic. He dived to his right midway through the second set to hit a forehand behind the baseline, a modern update in this era of supreme defense to the diving volleys that net-rushers like Boris Becker used to hit.
Then there were the moments — the trademark moments — when he was pushed wide into what was once considered a vulnerable position and responded with something strong and decisive.
“When he’s on defense, he can win the point with one shot; that’s an evolution of the game,” said Agassi, a four-time Australian Open champion who handed Djokovic the trophy Sunday night. “It’s remarkable to watch him play so far behind the baseline, to watch him play so far inside the baseline, to watch him be so defensive, to watch him be so offensive, watch how he upsets the spin and how he creates his own set of rules out there.”

The Telegraph – How Novak Djokovic turned himself into a champion
As Andy Murray will recognise, every top player has to go through some sort of heartbreak in order to fulfil their true potential. In fact, it is often a crushing defeat that triggers the stubborn, almost obsessional focus possessed by the great champions, writes Simon Briggs. In the case of Novak Djokovic, that moment came at the French Open almost three years ago. In a quarter-final against Austria’s Jürgen Melzer, he was the almost unbackable favourite – the 3rd seed about to take on the world no.27. But despite leading by two sets and a break, he let the match slip away. “That was the turnaround, mentally,” said Novak’s coach Marian Vajda. “After that defeat, he convinced himself that he had to work harder.”

Reuters
The Serbian world no.1 played 171 minutes of cat and mouse with his British rival…

BBC – Andy Murray loses out to Novak Djokovic’s brilliance
Djokovic prevailed because he was capable, when the spirited Murray was not, of raising his game to a yet more rarefied level.
For the champion, Melbourne’s blue plexicushion courts have become the ultimate second home. In victory on Sunday he won his third Aussie Open title on the bounce; he is the dominant player in arguably the dominant age.

BBC Sport’s tennis experts gave their analysis.
Boris Becker – six-time Grand Slam champion
The better man won the match. Once Djokovic won that second set he just started to find another level and Djokovic was the aggressor, he took more risks and more chances. The lesson we’ve learnt today is that there’s another level with Djokovic. He raised his level to the occasion and kept on playing better and better.
John Lloyd – former Australian Open finalist
It was an absolutely outstanding match. Some of the gets Djokovic made – balls were coming back from ridiculous positions. He really just went up a gear and suddenly started accelerating and Murray could not keep up with him. It looked, to me, that Djokovic could play for another five hours. Djokovic is just magnificent, absolutely magnificent.
Jeremy Bates – Former British number one
For two sets it was exceptional tennis, but Djokovic really showed why he is number one: his sustained ability to come up and deliver time and again at the highest level. Murray gave it is all. It was a terrific contest, as it is every time these two step on a court.

The Australian – Novak Djokovic is king with historic hat-trick
Fans have seen many guises of the Serbian this Australian Open. Djokovic was defiant in outlasting Stanislas Wawrinka, indestructible when overcoming that marathon to thrash Tomas Berdych and dominant when trouncing David Ferrer. But last night, against an opponent who had beaten him in the final of the US Open, Djokovic once again proved himself a champion.