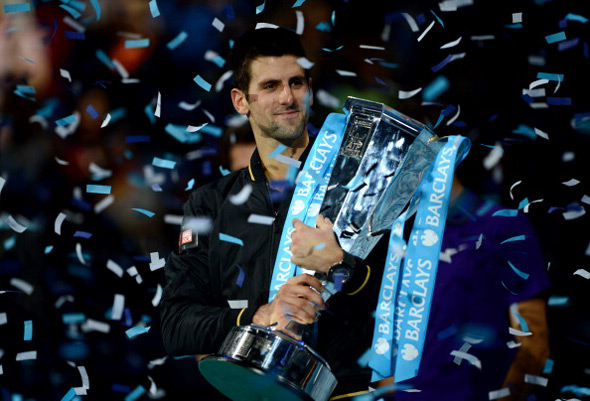 After securing year-end no.1 ranking for a second straight year, Novak confirmed his status as ‘best of the best’ with a thrilling victory at The O2 Arena on Monday.

Here is the world’s media reaction to Nole’s triumph over Roger Federer in the spectacular final in London, a perfect crowning achievement of another stellar season.

ESPN praises Novak and his 2012 season, writing about his spectacular win in a nearly six-hour Australian Open final for the third consecutive Grand Slam title, about reaching three of the four major finals and finishing as the No.1-ranked player for the second straight year.

“He flew from the baseline, his arms held in the position of wings, and screamed with delight in the direction of his team,“ Greg Garber wrote on Nole’s celebration after memorable win over Federer in the season finale title match.

GUARDIAN
World No.1 and No.2 produce a match worthy of their ranking

“Novak Djokovic finished the year as he began it, a champion.”

“What Federer did to Murray in the first set of their semi-final on Sunday night, Djokovic did to the Swiss last night, except at a higher level. After the Serb had shaken off his lethargy in the first three games, he produced a blizzard of winners, several quite brilliant ones,” writes Kevin Mitchell. “The Serb grabbed the title with the most majestic forehand passing shot.”

“Much of the tennis was sensational as the two men traded hammer-blow punches and retrieved balls from apparently impossible positions. Djokovic in particular seemed to defy all physical logic with the way he slid into his shots – an extraordinary ability on a hard court – and found the power to hit winners when most mortals would have been relieved simply to play defensive lobs. The 25-year-old Serb has taken athleticism in tennis to another dimension,” writes Paul Newman.

“Djokovic will probably never match the year he had in 2011, when he won three Grand Slam tournaments and seven other titles, but, considering the challenge he faced in living up to those exploits, his follow-up season has been every bit as admirable.“

“Here it was — a superb year for men’s tennis encapsulated in one brilliantly played match. Novak Djokovic, already assured of finishing at No.1 in the world, confirmed that status by holding off the mesmerizing skills of the legend that is Roger Federer to win the final match of the year,” writes Richard Evans.

“Novak Djokovic put a firm stamp on his position as world number one with a stunning victory over Roger Federer in the ATP World Tour Finals. The Serb won 7-6 (8-6) 7-5 to add the season-ending title to his Australian Open victory and top ranking,” writes Piers Newbery.

“The final point was a breathtaking shot on which to end the tennis year, and one that summed up why Djokovic remains number one among such star-studded company.”

BBC tennis correspondent Jonathan Overend: “This is the thing about Djokovic; he’s a fighter with a never-say-die attitude. Finishing two successive seasons as the world number one, considering the standard of opposition, is a phenomenal achievement.”

“Novak Djokovic’s victory Roger Federer at the O2 Arena on Monday night brought to an end another incredible season for the world number one. He might have won three Grand Slams and had a 43-match winning streak in 2011, but in some ways coming back to secure the end-of-year number one spot again in 2012 is an even more impressive achievement.”

“I think the game’s stronger than it’s ever been, so Djokovic maintaining his place at the top of the game after last year, when he just dominated everything and was the clear number one, is something really special. It’s a fitting reward he’s been able to win this Championship. Right now, beating Djokovic is the toughest challenge in tennis,” concluded Henman.