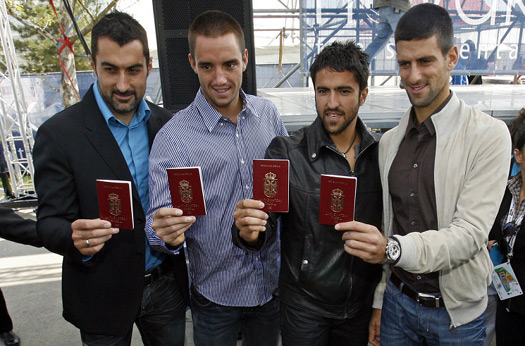 Diplomatic passports were handed over to Ana Jovanovic, Bojana Jovanovski, Janko Tipsarevic, Nenad Zimonjic, Viktor Troicki and Novak Djokovic, and others who are not in Belgrade, will receive passports afterwards.

“I am honoured to promote to diplomatic service people who have contributed to the popularity of Serbia in the world. Our country has gone through a bad period and the effects can still be felt. Bad image, disrepute and prejudice are still present in some parts of the world. The most effective way to fight something like that is love and arduousness for the country. I think there is no one who could say that you (the players) are not champions in those categories. It’s a great honour to represent country in that way, and also there is not a single country in the world which wouldn’t be honoured to have you as ambassadors,” said Vuk Jeremic.

Novak addressed the audience too.

“Thank you all for coming. It is a great honour for us to be ambassadors of our country. We are individual athletes, but wherever we go we will be recognizable, at least at airports. I am really not used to diplomatic speaches, so I’ll conclude with the sentence that we’ll all try to justify your confidence in us,” said Nole.