Kids and stars at Kid’s Day… 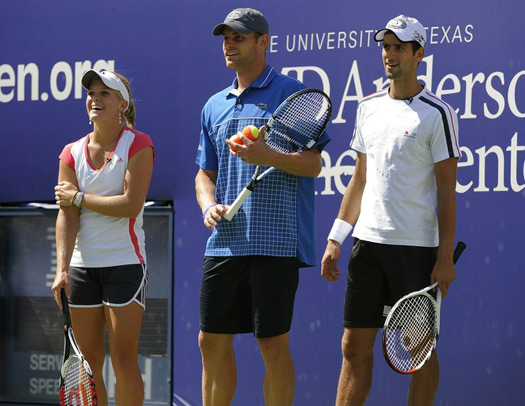 It was one of the most difficult days in this week, that has now already passed. Two practice sessions, morning with Andy Murray and afternoon with Rainer Schuettler. We also managed to do conditioning workout because, as everyone knows, playing at such a big tournament means one has to be ready for extraordinary efforts and endurance, that sometimes last for hours.

In addition to all those “regular” obligations mentioned above, that are our daily routine, I needed to dedicate some time to the tournament organisers and the media.

Like the previous evening, in this preparation period before the tournament, we’ve done the necessary recovery, and “spiced” the evening with already standard billiards games. The advantage that doctor and I easily gained in our favor has been slowly melting. Our opponents (my physiotherapist Miljan and fitness coach Gebhard) are showing they’re not only amateurs, as they presented themselves to us initially. Tactical deceit!

Beautiful and sunny days! One could say, resplendent! We replaced the peace and quiet of the place we stay at, with the New York heat at USTA courts. Enormous crowds around them, a lot of cars, visitors, traffic police, security control and the NYPD check at every 100 meters. The atmosphere one can only feel at such big tournaments!

Players and teams that follow us are slowly beginning to feel uneasy because less than two days are left till the start of the tournament. For some players only one, depending on whether they are in the top or bottom half of the draw.
We have found out today (Saturday) that I am scheduled to play my first round match on Tuesday. There’s enough time till then to relax a little bit and to be fresh for the opening match.

Today I participated in the 2010 Arthur Ashe Kids’ Day, traditionally held every year on Centre Court. About 15000 children and their families filled the Arthur Ashe Stadium. Andy Roddick, Melanie Oudin and Olympic gold-medal skier Lindsey Vonn also took part in the event. And of course, my musical performance with Bryan Brothers:

Expect a special Nole’s Diary entry on Wednesday, September 1, we’re sure it will thrill the fans. Until then, stay with us and cheer Nole tonight!

Mini blogs and diary entries will be in section Diary in future, so don’t forget from time to time to check what’s new ;) Enjoy!