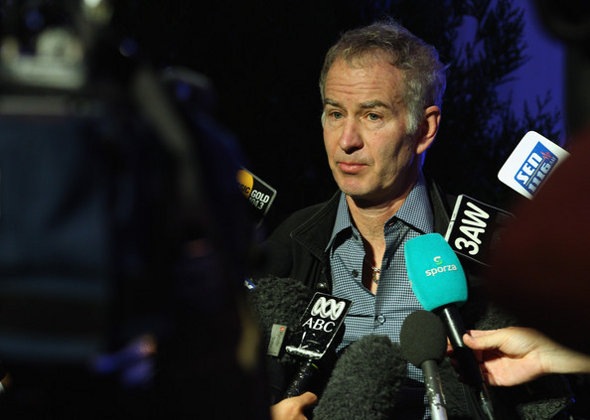 John McEnroe, a winner of four US Opens, has backed Novak Djokovic to successfully defend his title in New York.

McEnroe, who now plays on the ATP Champions Tour and will compete in the Statoil Masters Tennis tournament at the Royal Albert Hall in London, 5-9 December, believes that it is difficult to pick a winner this year as the top three players are so closely matched. But, when pushed for a prediction, he chose Djokovic.

“I’m probably going to have to pick Djokovic right now, although there’s not a lot to choose between the three top guys (Djokovic, Federer, Murray),” said McEnroe.

The American has always been fond of Novak, and memorably ran down from the commentary box and onto the Arthur Ashe Stadium Court a couple of years ago to play a point with him.

He also weighed up the chances of Federer and Murray in the absence of the injured Nadal, before coming to the conclusion that Djokovic would win the title.

“Nadal’s out of the picture but Murray’s beaten Nadal at the US Open before, so it’s not as if he didn’t feel he could do that in the past. He’s still got the two guys that he’s lost to in the Grand Slams to deal with. So, bigger beneficiaries of Nadal’s absence may be Roger and Novak. If you asked Roger, although he wouldn’t admit it, he’d be pleased that he doesn’t have to play Rafa because he’s got a pretty bad record against him. For him not to have to deal with him at all, I think that’s a good thing for him. But I’d have to pick Djokovic right now.”