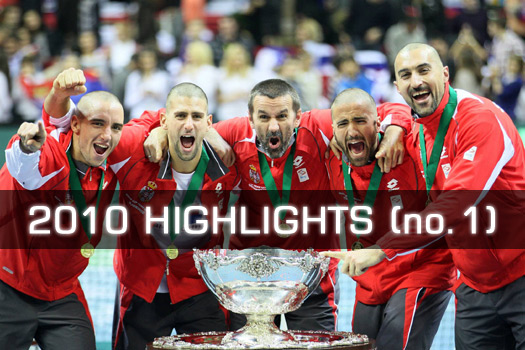 It’s time to look back at everything that the eighth professional season brought to Nole.

Nineteen tournaments, exhibition in Kooyong, Davis Cup … Four great achievements, four trophies. Nole successfully defended his title in Dubai in February for the first time in his career. He then clinched the doubles title in London (Queen’s Club) in pair with Jonathan Erlich of Israel. Novak defended his second title at the ATP tournament in Beijing in October. And finally, the sweetest triumph! The historic victory of Serbia in Davis Cup over France in Belgrade. He won all seven matches for the national team this year!

Nole made the quarterfinals or better in all four Grand Slams in 2010. He reached quarterfinals in Melbourne and Paris, semifinals in Wimbledon and finals at the US Open. Semi-final match against Roger Federer at Flushing Meadows is declared the best match in 2010! Fantastic victory over the best tennis player of all time – 5-7, 6-1, 5-7, 6-2, 7-5.

Stay tuned, we will make a 2010 summary in the next five days.

We, the team of Nole’s official website, have chosen over 100 most beautiful Novak’s points (45 minutes) that have marked the season.

Here’s the first of three videos, let the fun begin!