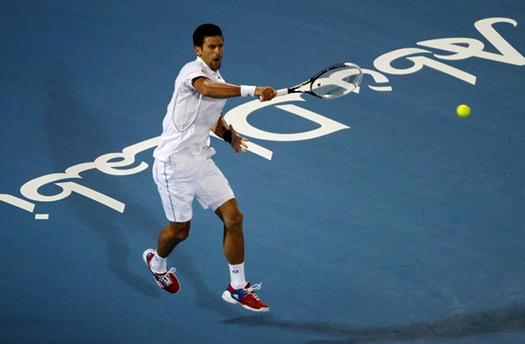 Nole has kicked off the Abu Dhabi exhibition event with a 6-2, 4-6, 6-2 victory over world no.15 Gael Monfils, in his first match since the ATP World Tour Finals in London.

The Serbian is making his first appearance at the Abu Dhabi International Tennis Complex in Zayed Sports City. He is now fully recovered, both physically and mentally, and is bidding to re-kindle his spark.

It is a perfect three-day feast for tennis fans in the UAE to ring out the old year when the six players renew old rivalries and test themselves ahead of 2012.

The two have met eight times before with all meetings going to the Serb.

Novak was satisfied with his performance. “I was working on some things throughout the match,” he said. “I was trying to find a good rhythm and I think I was playing really well for this stage. I am saying that as I am not yet 100 percent ready to perform at this level.”

Prior to the debut of Nole and Monfils, Spain’s world number five David Ferrer beat the sixth-ranked Jo-Wilfried Tsonga in an explosive start to the six-man winner-takes-all exhibition event.

Completing the line-up are world no.2 Rafael Nadal and no.3 Roger Federer, the last year’s finalists, who are seeded directly into tomorrow’s semi-finals.

Nole and Roger will be first on court on Friday, at 12:00 CET, while Nadal takes on Ferrer in all-Spanish clash.

“It is always a challenge to play Federer whether it is a tournament or exhibition,” said Nole. “He will always make you play well.”

The tournament is a good warm up for the Belgrade native as he will defend three Grand Slam titles in the new year, starting with Australian Open.