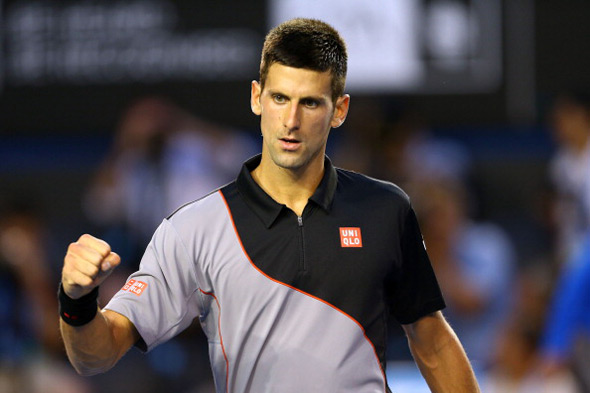 Defending champion Novak Djokovic produced another solid performance as he defeated world no.49 Denis Istomin of Uzbekistan in straight sets 6-3, 6-3, 7-5 to progress into the fourth round of the Australian Open.

Novak put the pressure on Istomin from the very beginning. He broke twice to take the opening set 6-3.

The Serb maintained the tempo and went on to take a 2 sets to 0 lead as he fired some big serves to make the most of the solitary break he earned in the fourth game.

Novak made another break in the fourth game of the third set. Serving for the match at 5-4, the second seed double-faulted to hand his opponent first break point chance in the match. Istomin leveled at 5-all, but Djokovic broke once again and served out the match to seal his 24th straight win at Melbourne Park, improving his perfect record against the Uzbek to 4-0.

“It was never going to be easy, Denis is a quality opponent, but in important moments I managed to stay composed. Obviously I didn’t want to drop that third set and get into a fourth,” the 26-year-old Belgrade native said. “Me and my team, we are always the biggest critics for myself and my game, but I have to be satisfied. As the tournament progresses I play better and better; I have to elevate my game and it’s important to stay focused and keep going.“

Novak will next face 15th-seeded Fabio Fognini in what will be their seventh career meeting (6-0).

“Fabio is a friend of mine, we grew up together, we are same generation. I know him really well, I played him the first time when we were 13, 14, we know each other’s games really well. It’s fourth round of Grand Slam, it’s getting tougher, so there is no easy match.”

Djokovic is attempting to win his fifth Australian title, looking to become the first man to achieve that feat since the Open Era began in 1968.