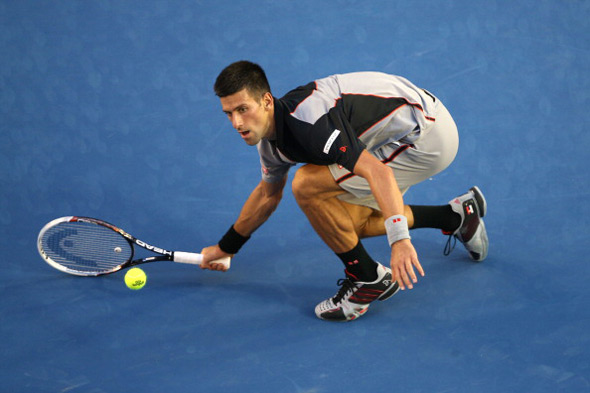 Twelve months after their memorable five-set battle at Melbourne Park, the pair again provided an epic match for the crowd. The eighth-seeded Swiss sealed his third career win over Novak in their 18 meetings, prevailing in four hours.

Djokovic raced through the opening set in 31 minutes, breaking his opponent twice for 6-2.

However, Wawrinka found his stride and put huge pressure on the world no.2 in the following two sets. Playing aggressively and accurately he took them 6-4 and 6-2.

Like last year, the pair went to the fifth set, and after trading early breaks it was the Serb who eventually gave in in the sixteenth game of the decider, giving Wawrinka passage to his first Australian Open semi-final.

“He served extremely well from the beginning to the end,” said Djokovic. “Every time he was in trouble, he was coming up with big serves. He took his chances. He deserved this win today. I congratulate him. There is nothing I can say. I gave my best, gave it all. I tried to come out as the winner. I tried to fight till the last point as I did in a similar match we had last year in round 4 here. But it wasn’t to be this time.”

Having won the Australian Open title in 2008, 2011, 2012 and 2013, Novak was attempting to win his fifth trophy in Melbourne and become the first man to achieve that feat since the Open Era began in 1968. He was also looking to reach his 15th straight Major semi-final.

The loss brought to an end a winning streak of 28 matches on tour and 25 matches over three years in Melbourne.

“I have to be very proud of my accomplishments in my whole career, and especially in this tournament. This is definitely by far the most successful Grand Slam that I have. I’ve been enjoying Australia, enjoying the support here and the conditions. I can’t wait to come back next year,“ Novak said.