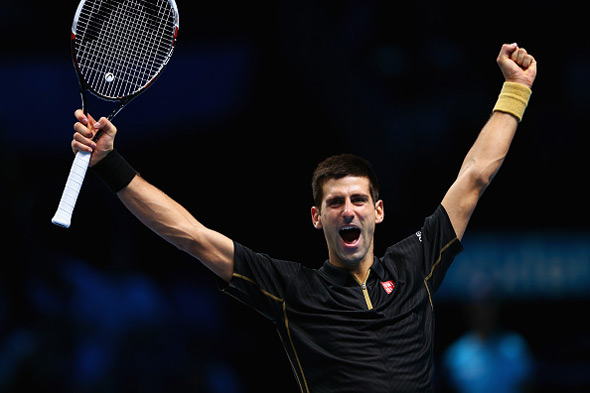 Novak is through to the final of the Barclays ATP World Tour Finals for the third year in a row!

The two-time defending champion needed 87 minutes to beat Kei Nishikori 6-1, 3-6, 6-0 and claim his third win in their five meetings.

Djokovic has won 14 matches in a row at The O2 and is now unbeaten in his past 31 indoor matches.

Novak sealed the 23-minute opener 6-1 with breaks in the fourth and sixth games, losing just two points on his serve.

The 27-year-old Belgrade native broke to open the second set, but double-faulted on break point in the next game and Nishikori was back on serve. Kei converted his opportunity in the eighth game and served it out to level the score at one set apiece.

Nole won six straight games in a decider for victory and 61-8 record on the season.

“I lost my concentration after the double fault. It was my mistake. I am going to face a lot like this tomorrow,” said Novak. “Kei was playing great and this has been the best season of his life, but he made some crucial double faults in the third set.”

Novak will be looking to win his fourth title at the season finale on Sunday at 18.00 local time (19.00 CET) when he faces no.2 seed and six-time former winner Roger Federer who saved four match points to prevail 4-6, 7-5, 7-6 (6) in a thrilling all-Swiss semi-final clash against third-seeded Stanislas Wawrinka.

Ahead of the final, Djokovic said: “Tomorrow is the last match of the season. Of course it’s one of the biggest tournaments in the world. This is already the biggest possible motivation. I will try to give everything I have.”

Novak is making his eighth consecutive appearance at the Barclays ATP World Tour Finals. He is aiming to become the first player to win the event three times in a row since Ivan Lendl achieved the feat from 1985-1987, the year in which Nole was born.