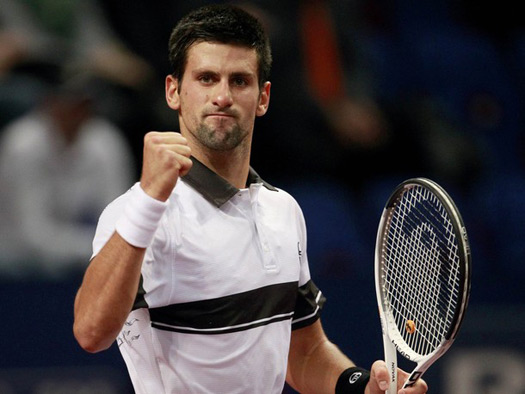 Nole is two steps away from defending his title in Basel.

The best Serbian tennis player and no.2 seed beat world no.66 Robin Haase in straight sets 6-2, 6-3 in 1 hour and 18 minutes to advance into the semi-finals of the ATP World Tour 500 event.

The first set wasn’t as easy as the result shows. Novak made a break in the second game that lasted 12 minutes, converting his sixth opportunity. Haase broke back immediately and then held to level the score. Nole broke his opponent’s serve again in the sixth and eighth games for 6-2 in 42 minutes.

A break in the second game of the second set was enough for the world no.3 to win the set and match 6-3.

“I have been playing really well the past four or five months,” said Nole after the match. “It is good seeing Viktor playing well ahead of the Davis Cup final. He has a big service and fast service, so it will be difficult.”

Novak is appearing in his 9th semi-final of the year. He will play against his friend and compatriot world no.32 Viktor Troicki who defeated Frenchman Richard Gasquet 6-4, 6-2.

Here is what Viktor said ahead of semi-final clash with Nole:
“Tomorrow I play one of the best players in the world, a good friend. We had a good match at the US Open. I had my chances but didn’t take them.”