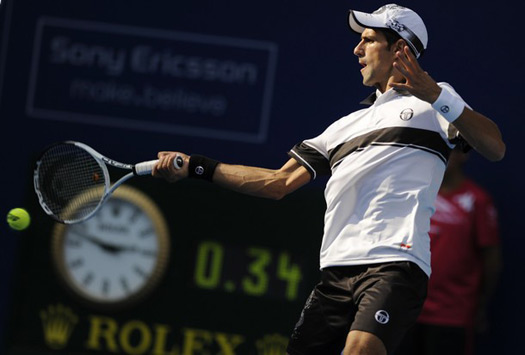 World no.2 Novak Djokovic continued his quest for 18th ATP World Tour title. The best Serbian tennis player earned a comfortable 6-3, 6-2 win over world no.43 Frenchman Gilles Simon in 1 hour and 19 minutes to advance to semi-finals of China Open.

This was their sixth match, Nole now leads 5-1.

Novak saved four break points in the opening game of the match to go ahead. The defending champion immediately put the pressure on Simon and broke his serve in the second game. He then held to consolidate the break for 3-0 lead. Djokovic needed to save three break points serving for the set at 5-3 before finally converting a sixth set-point chance for 6-3.

Nole broke his opponent’s service twice in the second set, in the first and fifth games, and closed out the set and match 6-2.

“As soon as I won the first set, I kind of raised the level of my game even a step further,” said Djokovic after the match. “I served out well when I needed to, which is very positive thing for me. Doesn’t happen too often. So I’m very happy that my serve is getting better and better, and hopefully I’m gonna use it more.”

Djokovic won their only previous encounter in the Davis Cup World Group first round tie in Belgrade, in March 2010.