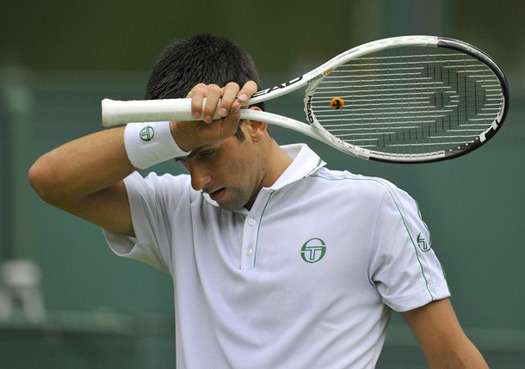 Third-seeded Novak Djokovic failed in attempt to reach his third career Grand Slam final and first at Wimbledon. No.12 seed Czech Tomas Berdych defeated him in straight sets 6-3, 7-6 (9), 6-3 in 2 hours and 18 minutes.

Novak pushed Berdych to deuce in the fifth game of the opening set, but the Czech rescued the situation by throwing down an ace before a second ace saw him hold. We saw the first break of the match in the sixth game when Djokovic handed two break points to Berdych with a few groundstroke errors. The Serb hit the net with a forehand and the Czech player wrapped up the set 6-3 in 33 minutes.

Djokovic faced three break points in eleventh game of the second set. He saved one, but missed an overhead smash with a shot miss that flied long. Berdych was serving for the set when Nole fought back using his third chance to level to 6-6, and the set went to a tie-breaker. A double fault by Djokovic brought up four set points for the Czech at 6-2, but the Serb saved all four and earned himself a set point winning fifth point in a row for 7-6. Novak had one more chance to level the match, but Berdych saved it with a big serve before a double fault from Djokovic saw him take the set 11-9 for a 2-0 lead.

A double fault from the 23-year-old Belgrade native in the eighth game of the third set brought up break point for Berdych and another double fault followed it. Suddenly Berdych was serving for a place in the Wimbledon final. The Czech closed the set and match 6-3.

”I want to congratulate him,” said Novak. “He played a great match and a great tournament. He’s just a better player today on the court.”

Point of the match:

Djokovic repeated his best performance at Wimbledon (semifinalist 2007) and he’ll be awarded 720 ATP points and £250,000.

Novak will return to no.2 in the ATP Rankings on Monday. Roger Federer will drop to no.3 as a result of his quarter-final loss to Tomas Berdych.

Djokovic will lead Serbia in the upcoming Davis Cup by BNP Paribas World Group quarterfinals against Croatia in Split, taking place from 9-11 July.