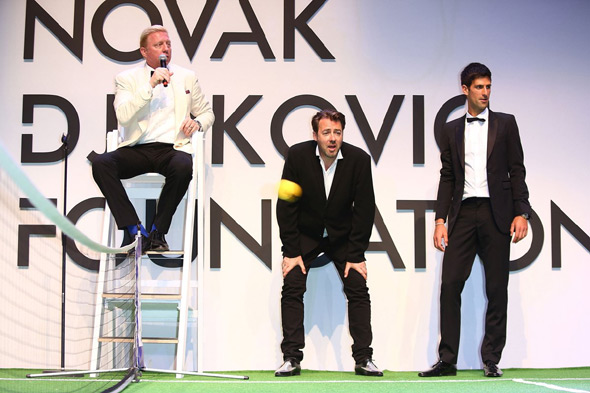 Tennis legend Boris Becker has joined the coaching team of Novak Djokovic for the next season, becoming his Head Coach. One of the best tennis players in history, as Novak’s head coach, joined Marian Vajda, Miljan Amanovic and Gebhard Phil-Gritsch, and he will travel with world number two to Australian Open, Dubai, Miami, Monte Carlo, Rome, Roland Garros, Wimbledon, Cincinnati, US Open, Shanghai, Paris and London.

Djokovic will begin working with Becker as he prepares for the Australian Open, which starts on January 13.

Marian Vajda will continue working in Novak’s team, and the Slovak will accompany Serbian player in Indian Wells, Madrid, Toronto and Beijing.

“I am really excited to have the opportunity to work with Boris. He is a true legend, someone who has great tennis knowledge and his experience will help me win new trophies from the Grand Slams and other tournaments. Becker is a great person, too, and I am sure he will fit in our team in the best possible way. Boris brings new fresh approach, and together with Vajda he will make a winning combination. My goal for 2014 is to play my best tennis and to get in shape for the Grand Slams and Masters 1000. These tournaments have the most weight in our sport, and I want to prove my worth at them. The team is now strenghtened and we hope for maximum results”, said Novak.

Now 46, Boris Becker is rated as one of the world’s greatest players, having won 64 ATP titles in his career. He is a former number one in the world, who captured six Grand Slam singles titles, and he became the youngest Wimbledon champion ever (as a 17 year old player). The German also led his country to victories in Davis Cup in 1988 and 1989. Among his success, there is a gold Olympic medal in doubles, and many other trophies.

“I am proud Novak invited me to become his Head Coach. I will do my best to help him reach his goals, and I am sure we can achieve great things together”, Becker said.

Marian Vajda has been together with Novak since 2006, and as he says, they both decided to invite Becker to join the team.

“In a few weeks Novak and I will start the eight year of our cooperation.  During that period we have achieved almost all the goals we had. I realized that Novak nedeed a new head coach in order for him to continue improving certain parts of the game. In the same time, I will have more time for my family. Becker’s assignment will not affect much my position in the team, since I will do all I can for Novak, just like I did before. On the other hand, choosing Boris as a head coach is a good solution, I am sure we will get along very well, and that Novak will continue to progress”, Vajda said.