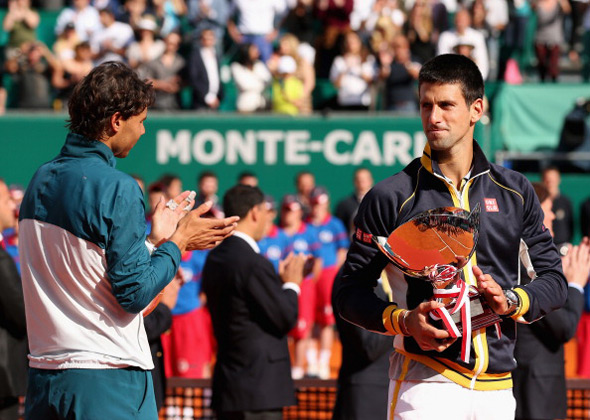 Nole has dethroned Rafa to become the new king of Monte Carlo!

Reigning ATP World Tour Champion captured his first Monte-Carlo Rolex Masters title on Sunday with a 6-2, 7-6 (1) victory over third seed Rafael Nadal of Spain in one hour and 52 minutes to win his eighth different Masters 1000 crown.

The top-seeded Serb won his third title of the season and his 14th ATP World Tour Masters 1000 trophy. The only event he has yet to win is the Western & Southern Open in Cincinatti.

Novak, who was appearing in his 56th ATP World Tour level final, has now won 37 trophies.

In the 34th encounter between the two players, Djokovic seized control in brilliant fashion.

The Serbian star took advantage by gaining service breaks in the second and fourth games and raced to a 5-0 lead. He missed five break/set points in the sixth game, and then got broken in the next when serving for the set. Djokovic made a third break when Nadal double faulted on Nole’s eighth set point.

Nadal made a break in the fifth game of the second set and consolidated it to go 4-2 up. Nole regained his composure, played a superb game, with backhand, forehand and service winners to hold to love and then broke back to level the result. He was broken again in the 11th game, but found strength to fight back once more with Spaniard serving for the set. Djokovic saved the best for last, taking the tie-break 7-1 to end Nadal’s reign of 46 straight wins and eight consecutive titles in Monte Carlo, making it third time lucky after finishing runner-up to the Spaniard in 2009 and 2012.

“It’s a great pleasure to be here. It’s a magnificent moment, very, very special, because I live here and have a lot of support,” Novak said at the trophy ceremony. “Rafa, it was a pleasure once again. Thank you for letting me win at least once.”

“I cannot wish for a better start of the clay season. I spend a lot of time in Monaco so I know a lot of people, we became friends over many years, and its definitely the most beautiful club in the world. I’m very privileged to be playing in it. I didn’t know if I was going to be able to play this year. Right now it’s the best decision of my life!”

The 25-year-old Belgrade native, who has spent 77 weeks at No.1, improved to 26-2 on the season with other championship successes coming at the Australian Open and the Dubai Duty Free Tennis Championships.

Djokovic will next play at the Mutua Madrid Open (5-12 May), where he reached quarter-finals last year. He triumphed at the ATP World Tour Masters 1000 event in 2011.