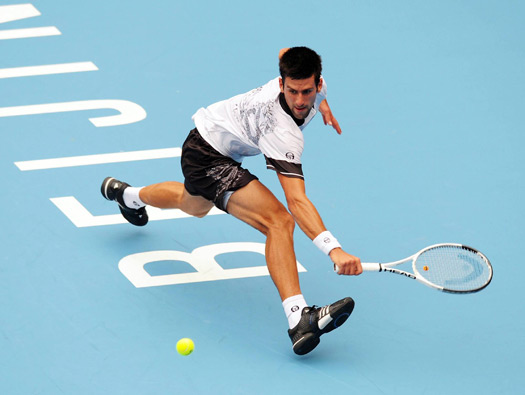 Nole has reached the China Open final for the second year in a row. He will now attempt to defend his ATP World Tour title for the second time in his career.

The best Serbian tennis player and no.1 seed beat big-serving American wild card world no 22 John Isner in straight sets, 7-6(1), 6-2 in 1 hour and 27 minutes to advance into the finals.

Isner made a break already in the opening game of the match. Novak had two break points in the very next game but he failed to convert them. He managed to break back in the sixth game, capitalising on his second break point opportunity for 3-3.The 23-year old from Belgrade had three break points in the 12th game, but the American held and the set went to a tiebreak. Djokovic was dominant, he made three mini breaks and won it 7-1 in 57 minutes.

Nole kept the momentum. He continued the match in great style, breaking his opponent’s service twice, in the first and seventh games, to clinch the second set and match 6-2.

The Serb converted 3 of his 12 break point opportunities, while the American capitalised on 1 of his 2 chances.

“I returned and played well on the return games and had a lot of opportunities throughout the whole match,” said Novak. “I used them when I needed to. I’m just happy to get through this one.”

Djokovic is appearing in his 3rd final of the year. He will play against either Croat Ivan Ljubicic or Spaniard David Ferrer in attempt to win his18th career title and second in 2010.