Novak too strong for Murray, sets Shanghai final with Tsonga! 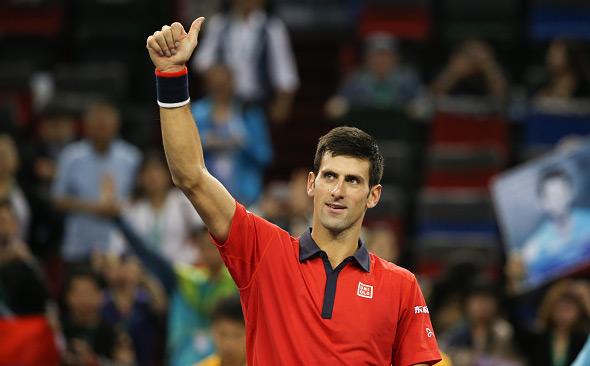 World no.1 Novak Djokovic remains in the hunt for his fifth ATP Masters 1000 title of 2015 after beating Andy Murray 6-1, 6-3 in the semi-finals of the Shanghai Rolex Masters on Saturday.

Novak produced an imperious performance in the match that was supposed to be another classic battle between the top two players in the world. He raced through the opener in just 25 minutes with three breaks, winning 91% of points on first serve, and 100% on second.

Djokovic dropped serve in the first game of the second set, but regrouped quickly to break Andy two more times, sealing the win after 67 minutes of play.

“It just felt great. From the very first point of the match I was playing with the right intensity, on a very high level. I had a very high first serve percentage… If you’re serving well, getting some free points against one of the best returners in the game, it’s a wind in the back. I played the best match of the tournament,” said Novak.

With the win, the 28-year-old Belgrade native improved to 72-5 on the year, moved ahead 20-9 in the pair’s H2H series, and reached his 13th straight tour-level final of the season.

Tsonga trails 6-13 in the rivalry against Novak, but did come out on top in the pair’s last meeting, in round 4 of the 2014 Canada Masters.

Looking ahead to the Tsonga clash, Djokovic said: “He’s been playing well entire week. He won in Metz a couple of weeks ago, so he is full of confidence. He played some powerful tennis against Nadal today, very aggressive, big serving. He relies heavily on his serve. Hopefully I can neutralize his serve, get a lot of returns back in play and get him on the move. It’s finals, both of us….we want to win this trophy equally, and hopefully we can put up a good final for the fans.”