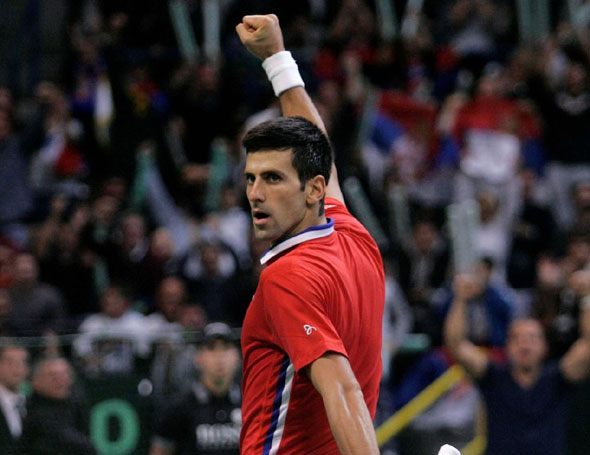 Serbia needs both wins over Czech Republic on Sunday to win the second Davis Cup by BNP Paribas crown.

World no.2 Novak Djokovic put 2010 winners up against defending champions in front of a passionate 15,500 home crowd in Belgrade Kombank Arena on Friday.

Novak made a break in the sixth game of the first singles match. He was serving for the set at 5-3, when Stepanek broke back. Djokovic put his opponent under pressure in the 12th game and converted the first of two set points for 7-5.

The ATP Finals champion rode the momentum in the second set and won it convincingly with a double break.

Nole broke the Czech in the ninth game of the third set and then held serve to seal the match and draw a standing ovation from the fans.

“I tried to be aggressive. He was mixing up the pace. The first set was very close but after that I felt better on the court,” Novak said. “It’s crucial that we have a win in the first match to get ahead in this tie. I am just happy that we are playing at home and that we have a full arena supporting us hopefully all the way to victory.”

The 26-year-old Belgrade native landed 72% of points on his first service, and impressive 100% on second.

Nenad Zimonjic and Ilija Bozoljac lost to Tomas Berdych and Radek Stepanek in in the doubles action on Saturday (2-6, 4-6, 6-7) to give a 2-1 advantage to the visitors.

Serbian no.1 racquet Novak Djokovic has the opportunity to clinch the second point for the home team, as he plays against Tomas Berdych on Sunday at 14:00 CET (H2H 14-2).