Davis Cup: Novak vs Querrey on Friday about 18.30 CET! 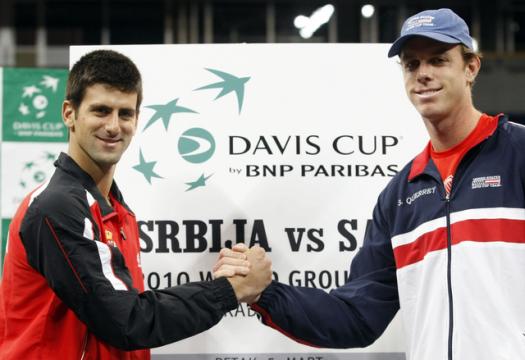 The draw for Serbia vs USA Davis Cup World Group first round tie (05 March – 07 March 2010) has been made on Thursday in Belgrade Arena.

The doubles match is scheduled on Saturday at 14.00 CET. Serbian duo Nenad Zimonjic and Janko Tipsarevic face the best doubles team in the history of tennis, brothers Bob and Mike Bryan.

On Sunday at 15.00 CET Djokovic plays against Isner. The second match sees Troicki take on Querrey.

USA is the most successful nation having been crowned Davis Cup champion on 32 occasions. They are led by captain Patrick McEnroe, while Bogdan Obradovic has that role in the Serbian team.

”The Americans have the most success in Davis Cup along with Australia. I think the audience and their support will be crucial. This is a very important match for both teams”, said Novak at the press conference.

Belgrade Arena capacity is 19,900 seats, Serbia will host the Americans on clay.