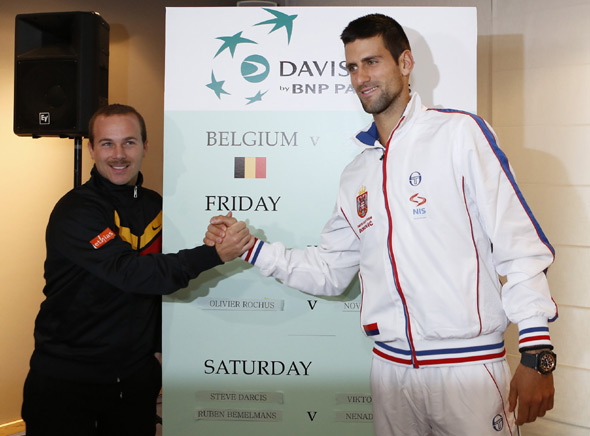 Viktor Troicki (39) has been drawn to face David Goffin (50) on Friday at 14.00 CET in the opening rubber of the Davis Cup by BNP Paribas first round tie between Belgium and Serbia (01 February – 03 February 2013).

The doubles match is scheduled on Saturday at 14:00 CET. Viktor Troicki has been chosen to play alongside doubles specialist Nenad Zimonjic against the duo of Ruben Bemelmans and Steve Darcis.

On Sunday at 14:00 CET Djokovic plays against Goffin. The second match sees Troicki take on O.Rochus.

“I’m definitely still feeling the jet lag, and it’s only been three days since I played the final, so I can not be fully recovered. I’m doing my best in order to prepare myself for tomorrow,” Novak said at the press conference. “That’s the reason I came in Europe earlier, that’s the reason I didn’t stay an extra day in Australia to have all the commitments with press and with tournament. I asked them politely if I can come a day before to Europe so I can get used to conditions here before the match.”

Troicki has stepped up into the no.2 singles position following the withdrawal of world no.9 Janko Tipsarevic, who pulled out of the tie earlier this week due to a heel injury he sustained at the Australian Open.

The full draw is listed below: