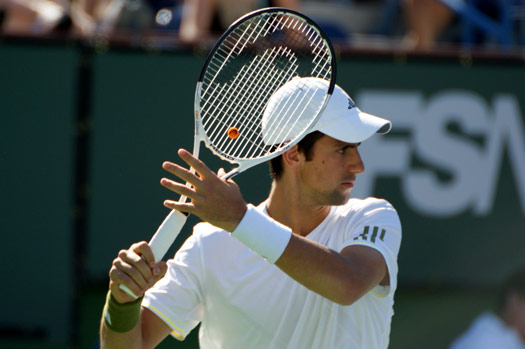 World number three Novak Djokovic lost to American Andy Roddick in straight sets 3-6 2-6 in 68 minutes in the quarterfinals of the BNP Paribas Open in Indian Wells.

Djokovic was broken already in the opening game of the match, and then Roddick closed out the game to 15 to consolidate his early break. From that moment Novak was looking more comfortable, but no.7 seed was cruising through his service games with his powerful serve, leaving defending champion without any chance for break. The American made one more break in the ninth game and took the set 6-3.

Nole had two break points in the third game of the second set, but Roddick survived with two thundering serves before winning the game with an ace. Djokovic went a break down in the sixth game after firing a backhand into the net. No.7 seed moved one game away from victory with a powerful service hold to love. Novak handed him a match point with a double fault. Roddick won the set 6-2.

Novak, who committed 30 unforced errors during the 68-minute match, said: “Overall it was a very bad day. There’s not much to say. He played very solid. I mean, he didn’t do anything special. It was all me making incredible amount of unforced errors. I just didn’t have any momentum on the court. No feel for the ball, no movement. Just no solutions.”

Djokovic served 2 aces to Roddick’s 5, and had 4 double faults. He hit 15 winners to Roddick’s 12, but made 29 unforced errors, 19 more than his opponent.
Novak had two chances for break but didn’t use a single, while the American converted 4 of 5 break points.

Andy Roddick advanced to the semifinals where he will face either world no.1 Spaniard Rafael Nadal or no.6 seed Argentine Juan Martin Del Potro.
The other semifinal match is between Roger Federer (SUI, 2) and Andy Murray (GBR ,4).

Novak will lose 820 ATP points after this quarterfinal defeat, but he will still be ranked 3rd with 8420. The second ATP World Tour 1000 tournament of the season starts next week in Miami. Djokovic lost in the second round last year, so he’s not defending any points.