Djokovic battles past Delic to reach the fourth round in Melbourne! 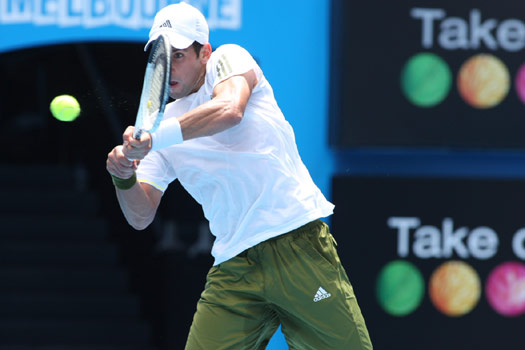 Defending champion Novak Djokovic advanced to the fourth round of Australian Open with a hard-fought 6:2 4:6 6:3 7:6(4) victory over world no.127 Amer Delic in 3 hours and 6 minutes on Rod Laver Arena on Friday.

First set was very comfortable and solid from the world number three. He broke Delic’s service in the fourth game and then held to 15 to increase his lead to 4:1. The Serb faced break points in the seventh game. After saving the first, he got out of the trouble with an ace and held for 5:2. Djokovic made a second break to take the set 6:2.

Delic earned himself a break point in the fifth game of the second set but Djokovic saved it with an ace. The American earned another one and used it to go up 3:2. Novak had an opportunity to break back immediately, but Delic held to increase his lead. There were no breaks til the end of the set and the 26-year-old won it 6:4.

Djokovic made a break in the second game of the third set and then faced two break points, but saved the first with an ace and the second with a service winner to hold for 3:0. Number three seed was serving for the set at 5:3. He held to love for 6:3 and a two sets to one lead.

Nole faced scare in the tenth game of the fourth set but he managed to save two break/set points to equalise to 5:5. The set went to a tie-breaker and Djokovic won it 7-4.

Novak hit 30 winners and 11 aces. He made 27 unforced errors and converted 3 of 8 break points.

”I need some matches like this to feel really what is Grand Slam all about,” said Novak. “It’s about those long four‑, five‑set matches in the heat like this. I didn’t really plan to be that long on the court, of course. You always want to finish the job as soon as possible. As I said, the positive thing is that I got more time out there, and looking forward to the upcoming match.”

His opponent in round four will be Cypriot Marcos Baghdatis who defeated American Mardy Fish (no.#23 seed) in straight sets.

Djokovic and Baghdatis met twice in 2007, Nole won both matches.