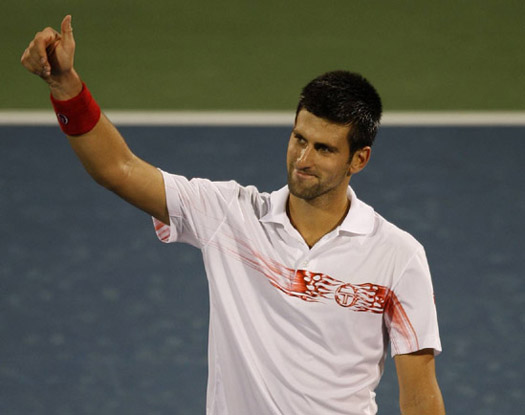 Top seed at the Barclays Dubai Tennis Championships Novak Djokovic overcame a slow start to beat his compatriot and friend world no.35 Viktor Troicki 3-6, 6-4, 6-2 in 2 hours and 5 minutes.

Novak was broken already in the opening game of the match. He saved two break points, but Troicki used his third chance and then held to consolidate the break. Djokovic made three straight errors in the ninth game to hand three break/set points to Serbian number two which he used and took the set 6-3.

Troicki cruised through his opening service game of the second set, but the world no.2 earned two break points in the third game which looked like the start of his comeback. Viktor held this time, but he could not resist much longer. Novak’s body language was improving, he started playing much better. He was more aggressive, and Troicki lost his momentum and fell under Djokovic’s pressure in the seventh game. That break was enough for Nole to win the set 6-4.

The defending champion grabbed the double break at the beginning of the decisive final set and held to love for 4-0 lead. The 22-year-old Serb closed the set and match 6-2.

Djokovic will play against Ivan Ljubicic for a place in Dubai semi-finals. The Croat upset no.5 seed Frenchman Jo-Wilfried Tsonga in straight sets 7-5, 6-3.