Djokovic bounces back to reach the third round in Melbourne! 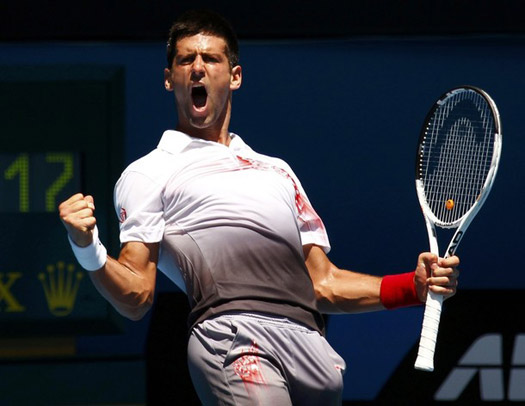 Djokovic made a break in the fifth game to take the advantage in the opening set, but Chiudinelli broke back immediately to equalize to 3-3. Novak was broken again in the eighth game and Chiudinelli closed out the set 6-3.

The 22-year-old dominated the world no.58 in the second set. After failing to convert break points in the first and third game, Chiudinelli was broken in the fourth. Djokovic consolidated his break and broke once more for 5-1 lead. The Serb clinched the set 6-1 in 40 minutes.

No.3 seed made two service breaks in a row at the very start of the third set for 3-0. Chiudinelli called a medical timeout and received treatment on his right foot during the fourth game but managed to break Djokovic’s service. Nole broke straight back and then held to increase his lead to 5-1. The Swiss continued to struggle with his foot injury and Novak took the set 6-1.

A break in the eighth game was enough for Djokovic to win the fourth set 6-3 and reach the third round of Australian Open.

“I was frustrated, especially at start of the match, because he was really giving it to me. He was very aggressive and stepping in and using ever opportunity that has been given to him”, said Djokovic after the match.

Novak will next meet world no.103 Denis Istomin from Uzbekistan who defeated German Michael Berrer in straight sets 7-5, 6-3, 6-4.

The two players have never met before.